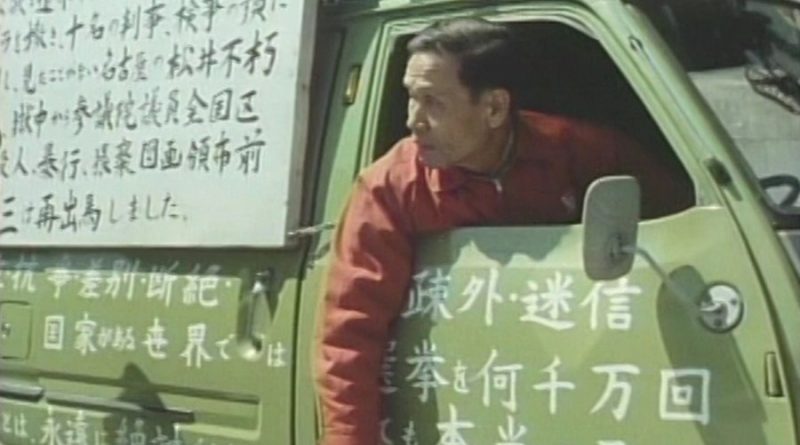 Cast: Kenzo Okuzaki and others

A violent and self-righteous World War 2 Japanese veteran is on an obsessive quest for justice in this disturbing and compelling documentary.

As part of a wider ideological attack on hierarchical Japanese culture and especially Emperor Hirohito, 65-year-old Kenzo Okuzaki is investigating the execution of 2 soldiers from his regiment in the last days of WW2.

Accompanied by the documentary crew (who remain detached throughout), Okuzaki travels round Japan in a car that’s covered in anti-government slogans, interviewing the comrades and commanding officers of the dead men.

Faced with shifty denials, evasions and attempts to transfer guilt and shame, Okuzaki lashes out physically: at one point at an ex-comrade he has recently taken a gift to in hospital.

The story these veterans eventually reveal to Okuzaki involves cannibalism as well as murder; and the stoically told details (for example of the difference between ‘black pig’ and ‘white pig’ human meat) are horrific.

But you end up fascinated by Okuzaki himself, in all his contradictions. He’s an old bloke who beats the shit out of other old blokes. He appears calm and deferential some of the time – and not just to get his foot in the door. But his outlaw mentality is clear from the outset, when he says to a policeman “I’ll do what I do, you do what you do”.

He’s been in prison for manslaughter, attempted assassination and treason. He has anger issues but also a firm belief that people should take responsibility for their evil actions. That’s his beef with the Emperor Hirohito – he never fessed up to the pain and suffering he caused.

We are all familiar with this style of confrontational documentary making: think Michael Moore and Nick Broomfield. But Okuzaki’s outlaw status is way more pronounced, which makes his ability to inhabit the moral high ground remarkable. At the same time, he can also admit that his criminal celebrity has increased business at the grocer’s he runs with his wife.

The fact that the strong personality of the inquisitor is foregrounded in this type of film shouldn’t blind us to a more originary question: why do people with something to hide agree to be interviewed on camera?

The Emperor’s Naked Army Marches On is out on Bluray and DVD from 11 November 2019.