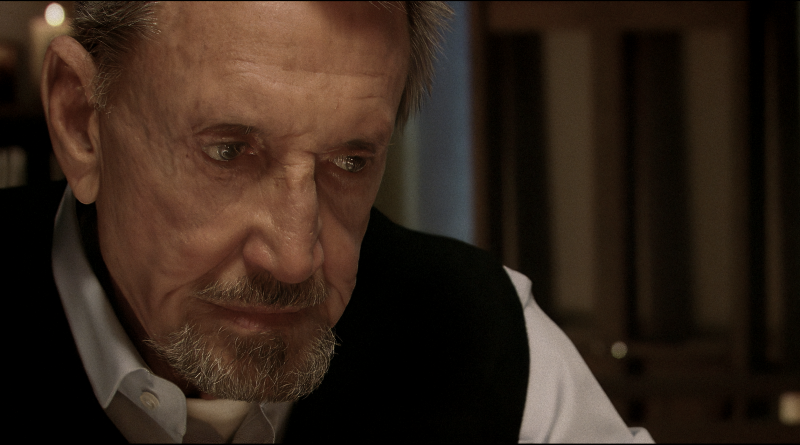 Written and Directed by Joshua Newton and co-starring Helmut Berger (The Godfather: Part III), Scott Cohen (Gilmore Girls, The Americans, The Marvelous Mrs. Maisel), Sarah Bolger (The Tudors, The Spiderwick Chronicles and Once Upon a Time) and Alexander Newton who plays a young Roy Scheider, the film is the first in what will be the ultimate movie experience for film lovers through new distributor MOVIEFARM, which has picked up the global rights.

With Roy Scheider sadly passing away during filming in 2008, completion of the film was put on hold until AI and CG technology was advanced enough to overcome the technical challenges faced by the filmmakers and now Roy Scheider fans worldwide will soon be able to celebrate the legend on screens this summer in 4k.

MOVIEFARM’s debut release is the suspenseful thriller Beautiful Blue Eyes – set in Germany with flashbacks to Nazi-occupied Poland and is the story of Joseph (Scheider), a retired NYPD cop who visits his estranged son Ronnie (Scott Cohen) in Nuremberg and insists that his neighbour is the SS Commander (Helmut Berger), who slaughtered his entire family in a Polish forest in 1941. In flashbacks, young Joseph (Alexander Newton), who has a romance with a beautiful young woman (Sarah Bolger),  escapes the Nazis and joins Resistance fighters in the Polish forests. As older Joseph enlists the help of his son Ronnie to kidnap Schrager, we’re confronted by moral issues of justice versus vengeance, the meaning of the title “Beautiful Blue Eyes”, and a gripping and unforgettable twist-laden climax.

Two-time Academy Award Nominee Roy Scheider’s last ever performance, he is best known for his starring role in Steven Spielberg’s Jaws (1975) as well as other major film hits as The French Connection (1971) alongside Gene Hackman, Klute (1971) with Jane Fonda and Donald Sutherland, Marathon Man (1976) starring Dustin Hoffman, 2010: The Year We Make Contact (1984), and his Best Actor Oscar and BAFTA nominated role as Joe Gideon in All That Jazz (1979).

Ahead of the London and New York charity premieres of Beautiful Blue Eyes, MOVIEFARM will be releasing 10,000 unique NFT action figure collectibles of screen icon Roy Scheider as he was in the film, designed by cutting edge digital artists.

Following a theatrical window and alongside availability to rent on main VOD platforms MOVIEFARM will be offering transferable ownership of purchased digital movies it releases under its brand name MOVIEKEY™, with Beautiful Blue Eyes being the first of many. Audiences can trade them, gift them, and resell them just like a BLU-RAY. Following the Premieres, owners of the digital art collectibles will be entitled to watch the movie at special cinema screenings across the globe, giving them the chance to meet the director and select members of the cast either in person or via Zoom; ask questions about the movie, and enjoy the exclusive MOVIEFARM physical movie theater experience.

Film industry veteran and CEO of MOVIEFARM, Martin Myers said:  “Beautiful Blue Eyes is a gripping thriller that addresses the premise of what a Holocaust survivor might have done had he come across the Nazi who murdered his family.  I’m honored to bring Roy Scheider’s breathtaking final performance to global audiences as MOVIEFARM’s first release.  Roy’s fans will enjoy the true ownership benefits of MOVIEKEY™, and the action figure collectible NFTs.”

BEAUTIFUL BLUE EYES’ will celebrate its London Premiere on 19th July 2022 followed by its theatrical release on 22nd July 2022.