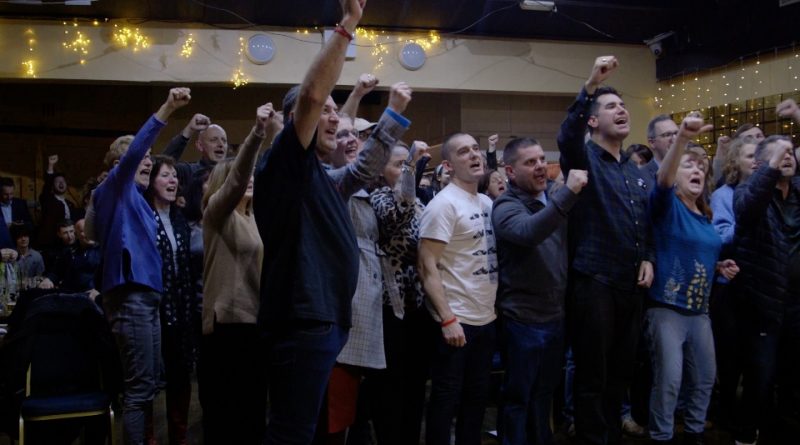 A new documentary charting three pivotal years in the UK’s Labour party politics, MANIFESTO – will be released in UK cinemas from 17th June.

MANIFESTO follows activists in the safest Labour seat in the country in Liverpool as they campaign for change. The film is directed, written, and produced by acclaimed documentary maker Daniel Draper (Nature of the Beast, The Big Meeting, Almost Liverpool 8). Since receiving a nomination for Best Film and Special Jury Prize at Sheffield Intl Documentary Festival 2021 for Almost Liverpool 8, Draper has continued his exploration of his working-class identity and the constituency he once called home with MANIFESTO.

MANIFESTO is a feature-length documentary about Walton Constituency Labour Party; the safest Labour seat in the country. Filmed over the course of three years by filmmakers who hail from the city, MANIFESTO captures the peaks and troughs of Jeremy Corbyn’s Labour Party from the coalface. Education, the NHS, Brexit, economics, the environment, workers’ rights and more are on the agenda as Walton CLP passionately campaign for change through Labour’s ‘For The Many’ manifesto.

Produced by Shut Out The Light Films, MANIFESTO is described as the final instalment of the Hope Trilogy (along with Nature of the Beast and The Big Meeting) in a series of films depicting the Labour movement over the last six years. It is a hopeful film about community activists who believe in collective action, effecting society from the bottom up. Shadowing the CLP members to meetings and protests, the hand-held approach to the filmpaints an unwavering picture of the hard work of the activists as they campaign on streets and picket lines.

MANIFESTO captures the under-represented facet of party politics at a vital time in British political history. The documentary gives a first-hand account of grassroots community activism, depicting the work and effort that goes into party politics away from Westminster.

I lived in the constituency of Walton for the first twenty-five years of my life. It’s an area I know well. A community I’m fond of and understand. When I first read The Ragged Trousered Philanthropists a decade ago, it had a great impact on me – it led to my first feature documentary, Nature of the Beast, which in turn steered me towards The Big Meeting. Manifesto therefore felt organic as I returned to my own community – the community in which Robert Tressell is buried, in a pauper’s grave.

I don’t believe a film should be objective and a cinema vérité approach to filmmaking can be misinterpreted as being so. I campaigned during the 2019 election (sometimes during shoots) just like the activists in this film. The camera that follows Walton CLP over three-years is itself one of the activists – which gives this film its authenticity. The Working-class narratives and voices are under-represented in both politics and film – and this is Manifesto’s strength. It’s a document of a time of hope, the peaks and troughs of party politics and the eternal optimism required to continue the good fight.”

MANIFESTO will be released in UK cinemas from 17th June.