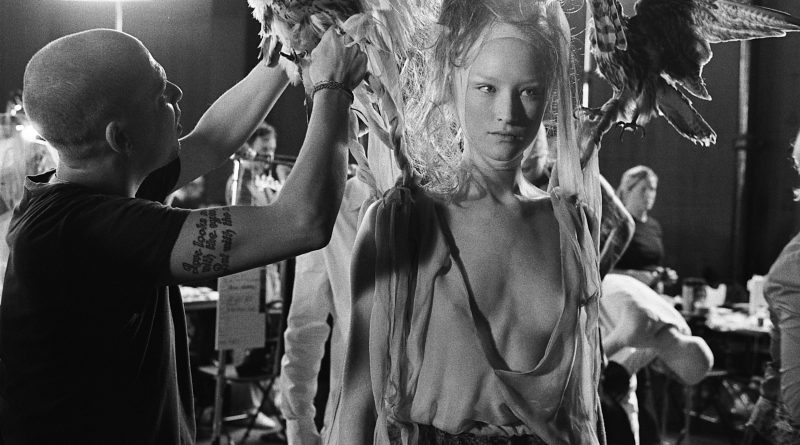 This is an unusual documentary about a very special designer. Not only remarkable as a depiction of Alexander McQueen’s fantastic designs, it also tells us a lot about McQueen the person. We look back on the young Lee McQueen, who learned about fashion from his mother.

Seemingly, an ordinary working-class boy from Stratford, London, he managed to get himself in to St Martin’s College of Art. After learning tailoring, McQueen honed his tailoring skills and worked hard to develop all round talents. He acquired a rich, admiring mentor in Isabella Blow who encouraged him to change his name to the more upmarket Alexander.

The film uses a lot of archive material which shows some of McQueen’s amazing catwalk shows. There are also filmed interviews with the designer’s colleagues, friends and family and, above all, with Alexander himself.

In particular, while we marvel at McQueen’s shows, including the 1995 Highland Rape which illustrated its tale with bruised models in ripped dresses, which was in some quarters at the time, decried as misogynist, and would certainly be so now.

The fashion world, and McQueen himself, was surprised when the traditional House of Givenchy chose Alexander to be their main designer in 1996. While he was able to fulfil the commercial requirements of the job, he wanted to undertake his own imaginative work. To manage this, he travelled backwards and forwards between Paris and London, which was very tiring.

Was it this that led to the designer committing suicide? Or did it follow the death of his long-time supporter, Isabella, who died of cancer? Or was it actually McQueen’s own demons?

It was a terrible shock and great loss to fashion when Alexander killed himself.

This is a very well-crafted film. Director Ian Bonhote, together with his co-director Peter Ettedgui, has got a long way inside the character of McQueen and also given us a flavour of his work. Go see.