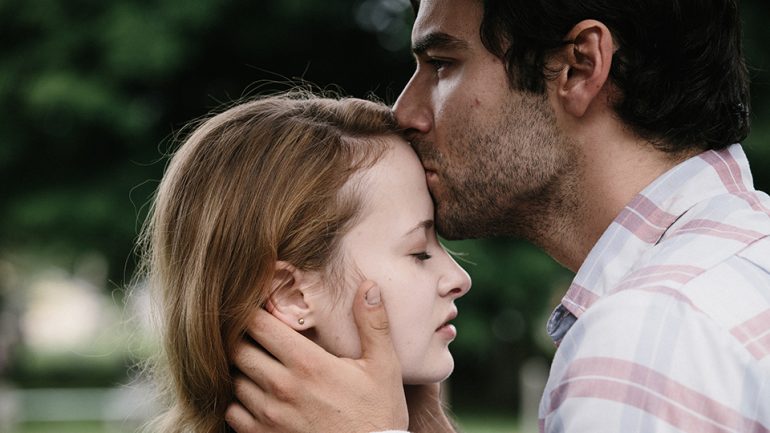 This is a strange, somewhat quirky film. It is a very unusual story with no real conclusions. Written by Jennifer Schur and directed by Monty Whitebloom and Andy Delaney, it shows Bess (Shannon Tarbet) who can’t see her mother. Bess lives with her father Murray (Matthew Broderick) who has Parkinson’s disease. She tells everyone she meets that her mother died in a car crash ten years ago. But actually Bess’s mother, Carolyn (Chloe Sevigny) is alive and living in the same house.

Bess goes for therapy with the eccentric young psychiatrist, Farmer (Benjamin Walker), who falls for her. He then introduces her to his neighbour, Russell (Aidan Turner), who is contemplating suicide. Bess is blind to Russell, too – although the film never explains why this is. Farmer gets the idea that Bess and Russell can help each other get better and tells Bess to speak to him even though she can’t see him.

It is all very strange, but Tarbet is exceptionally good as the selectively blind Bess. Even when someone stands in front of her you can believe that she doesn’t see them. A lovely looking girl, she sails through the film so that we can almost believe in her character…but not completely as the whole premise is so bizarre!

A good performance, too, is given by Turner who has a strained look but we can see his love for Bess develop. He doesn’t say much, but his face shows all his emotions. In smaller parts, Walker puts across the very strange psychiatrist while Sevigny has little to do but, like Turner, she manages to show how she is feeling with few words. Poor Broderick as Murray is caught in the middle as his daughter refuses to acknowledge her mother and accuses her father of being delusional about his wife’s presence.

Is Bess suffering from some kind of illness? Why can she see most people but not all? This is never explained and, to me, the film is somewhat unsatisfactory. If you are happy with getting no answers and enjoy a film with good acting and some lovely cinematography (by Monty Whitebloom), then this is the film for you.