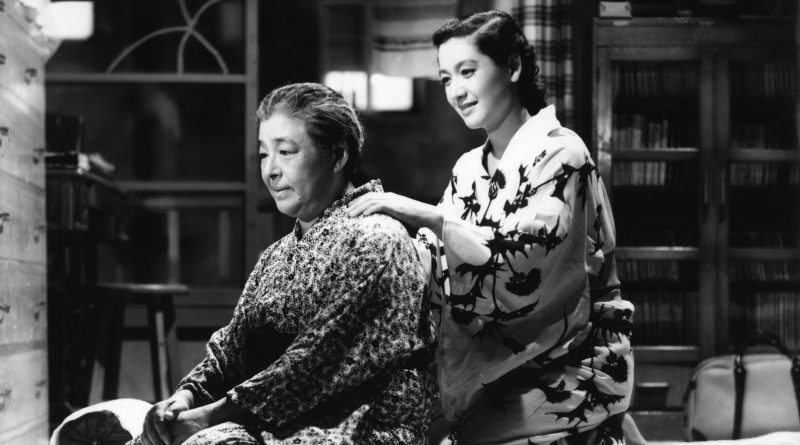 The BFI today announces highlights of BFI JAPAN 2020: OVER 100 YEARS OF JAPANESE CINEMA, a major celebration of Japanese cinema launching on 11 May 2020. Originally scheduled to run in venues across the UK from May – September 2020, the BFI has responded to the current situation by programming nine new online collections of Japanese films on BFI Player from May – October 2020. The season will continue in cinemas when they are able to reopen, hopefully later this year and into 2021. The BFI will also be launching a complementary digital events programme, to run concurrently on BFI YouTube, with details to be announced soon.

BFI JAPAN will feature the great classics of Yasujirō Ozu, Kenji Mizoguchi and Mikio Naruse, the samurai swordsmen of Akira Kurosawa and the pioneering women of the Golden Age like Kinuyo Tanaka. There will be striking films by post-war New Wave directors like Nagisa Oshima, vivid visions of Anime masters such as Hayao Miyazaki and Satoshi Kon, and the J-horror netherworlds created by filmmakers like Hideo Nakata. The season will also celebrate contemporary visionaries such as Takashi Miike, Takeshi Kitano and Naomi Kawase, as well as spotlight the next generation of creatives making waves in Japan, with the chance to see 21st century films which are yet to be made available in the UK. The season will also draw on the BFI National Archive’s significant collection of early films of Japan dating back to 1894, including travelogues, home movies and newsreels, offering audiences a rare chance to see how European and Japanese filmmakers captured life in Japan in the late 19th and early 20th centuries. BFI JAPAN will bring great works from over a century of cinema back to audiences across the UK, as well as spotlighting leading film and moving image creatives today.

Heather Stewart, BFI Creative Director said: “Japan has one of the richest cinematic traditions in the world, acclaimed for fusing the finest craftsmanship with an audacious and experimental spirit, and distinctive social and cultural histories with popular forms and genres. The BFI has a long term special relationship with Japanese cinema: we opened the very first BFI London Film Festival in 1957 with Kurosawa’s Throne of Blood and, in the same year, presented a landmark celebration of Japanese film at the National Film Theatre (now BFI Southbank). The BFI London Film Festival has since consistently introduced UK audiences to new Japanese filmmaking talent, and we have presented retrospectives at BFI Southbank of the work of Kurosawa, Mizoguchi, Oshima, Ichikawa, Ozu and Kore-eda, as well as a hugely popular celebration of Women in Japanese Melodrama.

Our audiences love Japanese film; Kurosawa continues to top the BFI’s DVD and Blu-ray label sales charts and our Japanese film seasons at BFI Southbank are amongst our most successful. We were cheered to hear recently Director Bong (Parasite’s Oscar-winning director) encouraging audiences not to let one inch subtitles stand in their way of seeing amazing films. Audiences can begin with the wonderful world of Japanese films which we are delighted to present in a first for the BFI – as a digitally-led season that audiences can enjoy from their own homes, before rolling out on big screens once cinemas are able to reopen.”

BFI JAPAN will spotlight one of the world’s greatest cinematic traditions, one that has long inspired admiration and fascination among audiences and creatives the world over. Classic films by Kurosawa, Ozu and Mizoguchi regularly rank at the very top of critics’ all time lists; Studio Ghibli leads the animated world in visionary imagination; while waves of innovators from the cinematic rebels of the 60s to today’s audio-visual live artists and video game auteurs take the moving image to thrilling new places. The influence of Japanese cinema cannot be overstated – Kurosawa in particular influenced Sergio Leone’s A FISTFUL OF DOLLARS (an often shot-for-shot remake of YOJIMBO), SEVEN SAMURAI was adapted into John Sturges’ THE MAGNIFICENT SEVEN and influenced films including Quentin Tarantino’s KILL BILL and George Miller’s MAD MAX: FURY ROAD. George Lucas has long acknowledged Kurosawa’s influence on STAR WARS, from the thematic elements and costumes, to Jedi being widely believed to derive from “jidaigeki” the term for period dramas set mostly during the Edo period.

BFI JAPAN will include:

–          There will also be a major new free collection released on BFI Player on 12 October: Early Films of Japan (1894-1914) will feature material from the BFI National Archive’s significant collection of early films of Japan dating back to 1894. Highlights include the oldest surviving film, JAPANESE DANCERS (1894) which captures three Japanese women performing an Imperial dance from The Mikado and early colour film JAPANESE FESTIVAL (1910) which celebrates the 50th anniversary of the opening of Yokohama’s Harbour. Full details of the Early Films of Japan collection will be announced soon.

–          There will be numerous BFI DVD and Blu-ray releases, including Ozu’s TOKYO STORY (1953) and THE FLAVOUR OF GREEN TEA OVER RICE (1952) – both in new 4K restorations; Toshio Matsumoto’s controversial debut FUNERAL PARADE OF ROSES (1969) will receive its UK Blu-ray premiere; and there will be a TAKESHI KITANO Blu-ray boxset featuring SONATINE (1993), VIOLENT COP (1989) and BOILING POINT (1990). All these films will be available on BFI Player.

–          An online events programme on BFI YouTube will run alongside the BFI Player season, featuring virtual Q&As, introductions and more. Details to be announced.

–          Sight & Sound will celebrate Anime this summer with a special issue out at the end of May.

WHEN CINEMAS ARE REOPENED:

–          There will be a BFI UK-wide re-release of Akira Kurosawa’s seminal masterpiece SEVEN SAMURAI (1954), back in cinemas from 23 October (pending reopening of venues).

–          A season dedicated to classic Japanese cinema will take place at BFI Southbank once the venue is able to reopen, featuring screenings of work from Kurosawa, Mizoguchi, Ozu and more, with special events, guests, and family screenings of Studio Ghibli classics. Additional seasons will follow in 2021 celebrating Anime and 21st Century filmmakers, with the latter co-presented by the Japan Foundation.

–          For audiences across the UK, the BFI has curated the BFI JAPAN TOUR, featuring classics from Yasujirō Ozu, Akira Kurosawa and more, so that regional cinemas can support BFI JAPAN. The BFI will also work closely with the BFI Film Audience Network (BFI FAN) to help venues book titles and host special events once they are able to consider reopening to the public.

–          BFI JAPAN will also feature a programme presented in collaboration with international partners including the National Film Archive Japan (NFAJ) in Tokyo, with more details to be announced soon.