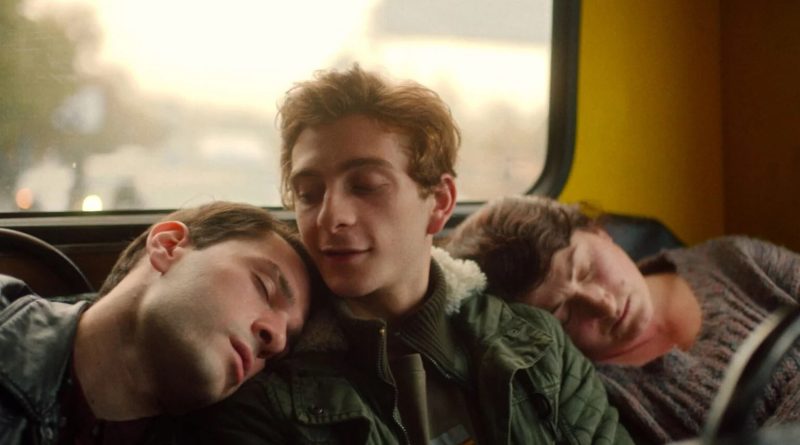 Set in the world of the National Georgian Ensemble dance school in Tbilisi, which trains young people in the strictly disciplined art of the country’s traditional dance, Levan Akin’s film tells the story of Merab, a talented young student, played by dancer Levan Gelbakhiani in his first acting role and his relationship with rebellious new arrival and rival Irakli (Bachi Valishvili).

It’s a very effectively told gay love story in its own right, in which the sexual tension between the two young men builds gradually and with increasing intensity.  The film is though particularly interesting because in the West we know so little about Georgia and its culture and traditions. It was part of the Soviet Union and now it isn’t. And that’s about the extent of most people’s knowledge, though some of us may remember that the national dance company was occasionally seen in the West in Soviet days.  And it is that national dance tradition which is so illuminating about the country and its attitudes, particularly the rigidly traditional way in which it views the roles of men and women.

It is the men who are the main dancers with the showiest choreography, while the women play a very subservient role.  But then there is the strong verbal emphasis the dance teacher places on masculinity in the dance. There must be no weakness, no sex in Georgian dance. It is born out of military traditions and you must dance “like a nail”.

So it is no surprise to learn that this is a society which is violently intolerant of homosexuality.  At one point in the story the students are vying for a vacancy which has arisen in the main company caused by a gay dancer being beaten up for his sexuality.  This we gather is not unusual. In real life a few years ago dozens of gay activists proudly marching against homophobia were violently beaten by 20,000 protesters, led by Orthodox Church priests with the police doing nothing to prevent the incident.  This is a society with strictly defined traditional gender roles.  At one point we are even present at an old fashioned “shotgun wedding” of Merab’s brother to his pregnant bride.  And yet given half a chance the teenagers in the film behave like teenagers the world over with their pop music and most importantly their sexual awakening.

There is a good performance from Ana Javakishvili as Merab’s dance partner and best friend Mary, but the focus is mainly on his growing closeness with Irakli.   And because of that story line it was not an easy film to make.

There were problems with the dance companies and with the authorities.   When the film was invited to the Cannes Film Festival, the Georgian Ministry of Culture, who would normally have supported it, refused to pay for the cast and crew to attend the event because of the film’s homosexual storyline.  Most significant is the number of jobs in the film’s end credits, which are anonymous, including that of the all important choreographer.

This is a beautifully made and touching human story, which also gives us a window into another world. And while what the dancing itself is telling us is in many ways somewhat uncomfortable, it is also terrifically exciting to watch.