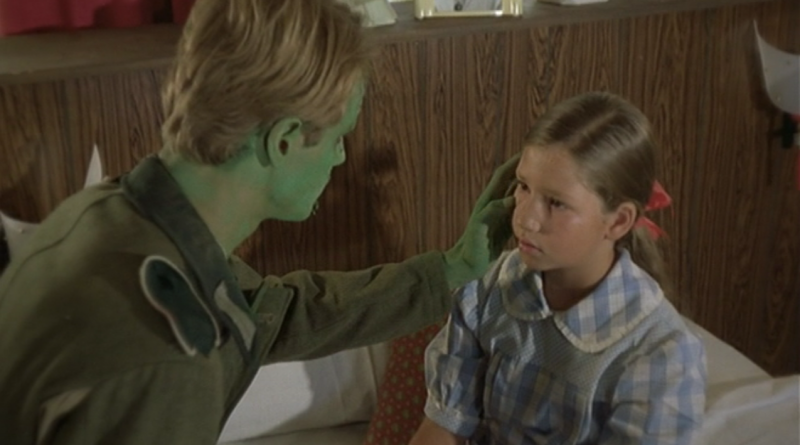 Bressonian notes tinge this low-budget lost ‘classic’ from France’s answer to Jess Franco. Zombie Lake is probably the first film ever to ask: ‘what would you do if your dad was a Nazi zombie?’

It’s the mid-50s and just outside a small town in rural France there is a lake. With Nazi zombies in it. Because the locals killed some German soldiers during the Occupation and dumped them in the lake. Now the Nazis are hungry for human meat and revenge.

The local mayor (Vernon) and an out-of-town reporter (Sharif) have an idea how to beat the green-faced monsters, but it is up to nine-year-old Helena (Anouchka) to make it all work, as she has a special relationship with one of the zombies.

There are several slightly scuzzy bits of nudity here but the big surprise is a World War Two French-German love story. The gore is pretty underwhelming.

Helena is the heart of the film, despite not appearing until halfway through. The naïve emotional note she brings makes the whole film rather likeable, despite … well, almost everything else. The sequence in which this innocent little girl brings a bucket of fresh blood to the zombies for them to feast on is both so wrong – and so right.

Noting what is ‘wrong’ with Zombie Lake is a pleasure in itself. The zombies’ faces are painted green – that’s the extent of their undead make-up for most of the film. One of the zombies (to the left of the screen in the sequences where they exit the lake) is overacting hideously, swinging his arms around from side to side while swinging his body for good measure. But he’s all Method in comparison to Helena’s grandmother – her plywood-set munching acting shoots us back in time to 1890, all extreme hand gestures and crying. Then there’s the long, slightly pointless discussions, my favourite being one between the mayor and the journalist on the history of the name of the lake, the ‘Damned Lake’. Should it really be called ‘The Lake of the Damned’ or ‘The Damned Lake of the Damned’?

According to a low-budget horror film fan chum, Zombie Lake really is a bit of a lost treasure. I’d say it’s not as surreal as some of Jean Rollin’s other films but the picture of weird French small-town life that emerges is pretty engaging.