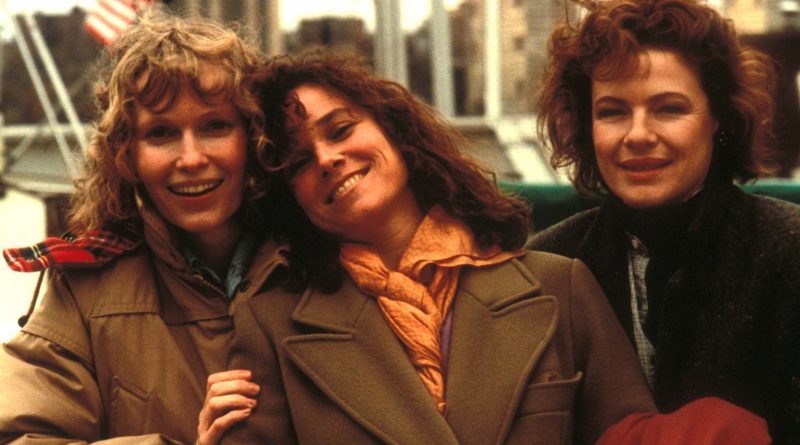 They may look like they’re a celebration of the good graces of middle-class women in their 40s, but watching this box set you realise there’s a brilliant malevolence at work, slowly making the case for pulling the plug on that celebration.

Arrow Academy’s third Woody Allen collection spans the busy years 1986 to 1991 and the bulk of his work with Mia Farrow, who is featured in all seven of these films:

Mia Farrow is central to the mood of these films, acting as the quintessential ‘good woman’ whom Allen has in his sights. As Michael Caine says of Farrow’s Hannah (his wife), she’s “too disgustingly perfect”. Dianne Wiest recurs in the films too, often playing Mia Farrow’s deeply dippy sister. So, although there’s some fine acting here, and some excellent writing for the female characters with nuanced ensemble exchanges (some of which I think would pass the Bechdel test) the characters still feel like stereotypes. This is also true of the male characters, but they aren’t being held up as strong family bedrock and moral compass all rolled into one.

In fact, for all their one liners and comically passive aggressive behaviour, the male characters are the source of most of the conflict in these films, both in a narrative sense and in their general feel. The camera and the dialogue may linger with female protagonists, as if in praise, but the praise quickly turns into a frustration with female resoluteness, as voiced by the male characters.

It is this gendered conflict that constitutes the moral ground of the films, most notably in Crimes and Misdemeanours where a direct link is made between the biblical story of Abraham’s willed sacrifice of Isaac and the murder of an uppity mistress. Gena Rowlands’ character in Another Woman is a striking limit case, in which the gendered roles blend and she comes to hate herself for her resoluteness and ambition.

Once you notice the dark side to these films, it is hard not to see it everywhere. But even if you take these Woody Allen films at face value, they are full of sexual betrayals, emotional manipulations and projected anger at characters’ own failings. It makes you wonder how Hannah and her Sisters became a ‘much-loved’ film!?

Allen is famous in the film production world as a director who ‘does exactly what it says on the tin’, making cheap films for a small but constant audience. That may never have been truer than in this period, with these films – they really do seem to be part of a family. The ensemble acting, the stories of extended family relations, the Chekovian pace, even the obvious play-like structure, camerawork and direction in a film like September, which Allen calls with defining simplicity ‘a play on film’.

I’ve always liked the nostalgic Radio Days, in which Allen narrates over Fellini-esque memories of family members from his childhood in the 1940s. It still comes across as warm-hearted and humorous, beautifully designed and shot. It’s as far from the dark side as you get in this set, without nosediving into whimsy, as a film like Alice does.

My preference here makes me wonder why I don’t count the other films as ‘serious’, when after all they are exploring gender relations, love, life and all that jazz. I suppose it is the apparent stereotyping of characters, a feeling that’s exacerbated by the tight, privileged social milieu within which the films are set.

The Blu-ray box set Woody Allen: Seven Films 1986 – 1991 is out on 20 February, with the individual titles released at later dates.