All good action movies need a hero you can rely on, and over the years, cinema has given us countless hard-men who are more than capable of looking after themselves and others. THE GUNMAN showcases a cast of tough guys who also happen to be wildly talented actors, including Sean Penn, Javier Bardem, Ray Winstone and Idris Elba; and to celebrate the film’s home entertainment release, we’re taking a look at how some of Hollywood’s greatest action heroes would fare in perilous situations in real life.

Penn summons his 24-year-old badass self and dons some leather in his newest action thriller, The Gunman. He wields a gun, murders without hesitation and kicks some serious butt. In the past, Penn has played a variety of different characters; troubled youth, stoner surfer, mentally handicapped father; but his true tough-guy persona shines through in movies such as Mystic River, Gangster Squad and At Close Range. How would Penn fair if real life was an action movie? He might seem unassuming, but we reckon the strong, silent Penn would be able to handle himself.

Tall, dark and handsome, Elba is most known for his roles in Pacific Rim, Thor and Prometheus. Though when he’s not fighting monstrous sea creatures, gods or advanced alien entities, he’s kicking ass and taking names right here on earth. Elba stars in some greats, including Takers, Legacy: Black Ops and American Gangster.
Would Idris Elba survive a real-life action packed life? Well, the man has fought monsters with huge teeth and super advanced, criminally insane rogue sentient robots that want to conquest and exterminate humanity, so we think he’d be okay- in any case, his cheeky, charming persona would probably end up winning the bad guys over.

You don’t want to mess with Ray Winstone but you do want to be around him when a crisis hits. He has an unshakable calm of a man who’s seen it all and done it all. I mean, even when he compliments you it’s mildly intimidating; in a recent interview he praised his fellow action co-star, Sean Penn saying “he can f***ing act.” He’s graced the screens in thrillers such as Scum, Edge of Darkness and the Departed. Yes, he played Mr. French; a man who murdered his own wife without hesitation or regret and stuck a gun under his chin, muttered the words “fuck it” and blew himself away. Do we even need to ask how Ray Winstone would do in a real life crisis? If there is impending doom lets all agree to meet at Winstone’s house, yeah?

He said he’d be back and kept his word. With his unmistakeable, thick Austrian accent, Schwarzenegger is brings his action hero, kick ass self back to the big screen in his latest film, Terminator Genisys. Other than the Terminator series, Schwarzenegger has starred in The Expendables, Escape Plan and Collateral Damage. His muscles have made him famous and his boss attitude makes him one to be reckoned with. If Arnold Schwarzenegger was in real danger, his colossal deltoids and triceps would in all likelihood take care of any threat. If you need me, I’ll be hiding behind Arnold.

When you think of Bruce Willis, what comes to mind? The ultimate action star. Funny man with a gun. The sort of guy that strikes fear into bad guys the world over. With starring roles in Die Hard, The Expendables, Red, The Fifth Element, Looper, Armageddon, Sin City and whole a slew of other high-octane films. It seems like whenever you see Bruce Willis, he’s settling a score, and saving the day. It’s safe to say he’d definitely be on the front lines in any real life danger.

He is batman. Christian Bale has made himself into quite the young action star, kicking butt and protecting an unforgiving city in the Dark Knight Trilogy. Bale’s dishevelled and unshaved self gives off an unapproachable attitude which makes him the perfect choice for some of the more prominent action packed roles. He’s starred in some memorable high energy thrillers like American Hustle, Out of the Furnace, Equilibrium, The Fighter and Public Enemies.
We think one hint of his famed ‘Batman voice’ would have most dangerous types running for cover. Remember back in 2008 when Bale had a meltdown on set? Well, listen to that tape and tell me how he would bode in a real life perilous situation.

When you’re Jason Statham, even your deltoids can look threatening. His sneezes are just growls and his smile is more of mischievous sneer. He’s graced the screen in such films as The Expendables, Crank, Transporter, The Italian Job, Revolver, War, Death Race and Snatch. This guy lives and breathes action and looks great while doing it. He makes Chuck Norris look like Richard Simmons. If Statham was in a real danger, we’re thinking he’s the one that would save world, get the girl and speed off in a black Audi before the police were even called.

THE GUNMAN is available on digital platforms from 13th July, 2015 and on Blu-Ray, DVD and Limited Edition Steelbook from 20th July 2015, courtesy of StudioCanal. 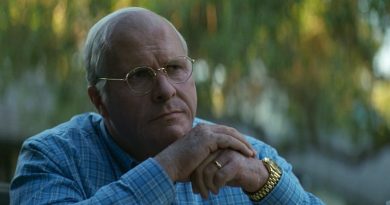