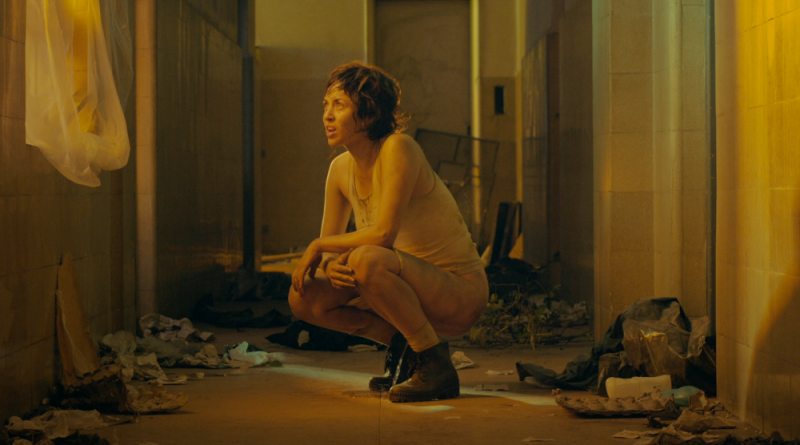 Very nicely shot and wild and weird as all get-go, this taboo-breaking exploration of carnal desire may leave the most resolute libertine feeling a bit tatty.

Mariano (Hernández) is a hermit living in a dilapidated institutional building. His only interface with the outside world is a pulley through a wall – with which he trades home-distilled liquid fuel for eggs, with unseen people. He ranges around one floor in his building, banging a drum and getting shit-faced on the liquid fuel.

Then a hungry young man and woman break in to Mariano’s odd world. He agrees to feed them if they will help him turn his dilapidated interior into a strange cocoon-like structure. The cocoon becomes a place where fears and inhibitions can be cast aside, giving birth to something bloody but extraordinary.

Taboo-wise, We Are The Flesh ticks boxes: incest, necrophilia, and cannibalism. It also includes a ‘nice to know’ about the uses of stale bread and one of the most demented wake-up call moments I’ve ever seen on film.

It’s Mariano who is responsible for this moment and it is Hernández’ incredibly physical and creepy performance that keeps the film going from one shock to the next – even when he briefly dies. The wonderful high-definition photography captures every ecstatic glitter on the surface of his dark eyes, every lascivious tonguing of his own lips. When he makes himself stooped and small talking to the young male intruder you know he’s just coiling, getting ready to pounce. He’s a snake, a jaguar, an eagle – we’re in the realm of an ancient shamanic mythology here.

Everything that happens is represented ritualistically, in a way that will cause dark stirrings in the right audience. Writer-director Emiliano Rocha Minter says in an interview extra that he’d been reading lots of Georges Bataille, the 20th century ‘philosopher of transgression’, who thought that life was driven by violently irrational and destructive impersonal energies that fed into religious conceptions of ‘the sacred’. So the boundary pushing is explicit and frenetic.

In the same sentence, Minter also mentions he’d been watching lots of films featuring Cantinflas, the Mexican Charlie Chaplin; and I think you can see an echo of that in Mariano’s transfigured madness.

This is lovely unique stuff, even if the shamanic and ritualistic element draw comparisons with Alejandro Jodorowsky; some of the psychedelic colour work looks like Gaspar Noe; and the sex has a stark Carlos Reygadas look to it (he was an executive producer).

We Are The Flesh seems to have become a bit of a collective triumph for Mexican cinema, with even Alfonso Cuaron and Alejandro Gonzalez Iñarritu giving it the thumbs up. Thank goodness for creative liberal elites – the Archbishop of Mexico City is probably still excommunicating people for watching Todd Solondz’ Happiness.

The extras are pretty good, with two of Minter’s shorts highlighting issues of confined spaces and ritual; interviews with cast and director; and a video essay by

critic Virginie Sélavy, who places the film in the ‘traditions’ of transgressive cinema, performance and writing.

Four and a half stars

We Are The Flesh comes to DVD and Blu-ray on 13 February.