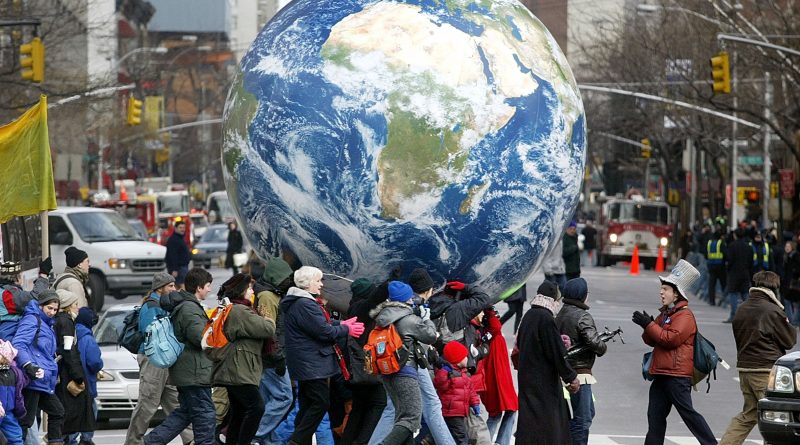 There’s a danger with any zeitgeist-capturing documentary that it arrives slightly out-of-sync with cultural events, so is little more than a well constructed time-capsule of talking heads and archive footage, beating a drum that has been dulled by the passing of time. Amir Amirani’s retrospective on the biggest demonstration in human history chronicles events that took place in 2003, so it’s testament to the indelible power of this feature that the points raised still resonate today, and also a damning indictment on how very little has changed in the intervening years.

The U.S. led invasion of Iraq happened on March 20th of that same year, and whilst this led to the irreparable fracturing of a country, countless lives lost or dehumanised, there was a movement of humanity that preceded it, a global gathering imbued with the hope that is manifested in this very film. We Are Many chronicles the origins of the anti-war marches that spread across the world that day, its evolution, and legacy.

All of the most successful documentaries have a natural momentum afforded to them by the events they’re depicting. Perhaps these are more condensed comparisons, but Asif Kapadia’s peerless, Senna, or Kevin McDonald’s, One Day in September, both benefit from ticking clock narratives. We Are Many is a similar domino effect documentary; rattling through the over-familiarity of the 9/11 disaster and facts perceived as common knowledge, stirring up memories of recognisable panto villains in Bush and Blair, the core of the film is the groundswell of humanity that dotted up, unbeknownst to some and forgotten by many, across the globe, and whilst unsuccessful in stopping Iraq, the film at least acts as a rabble-rousing reminder that democracy can still be a potent force.

The decade-plus lapse means that there is plenty of footage from which Amirani can weave his story, employing talking heads such as Damon Albarn (passionate), Brian Eno (his role in dismantling the WMD document is a fascinating insight), and Born on the Fourth of July veteran, Ron Kovic, to punctuate the archive. Some of the more “Hollywood” names are rather frustratingly included as little more than poster embellishment; Susan Sarandon is archive and Danny Glover has a single line.

The moments during which the film flourishes are those that imbue the viewer with passion; whether it’s through the filter of anger whilst watching a George Bush after-dinner speech in which he belittles the WMD search as the doc intercuts footage of suffering innocents, or the hope offered up by the rare vestige of compassion from a politician, as Robin Cooke resigns from Government on the eve of the vote.

The focus of the documentary does drift as it builds towards the protest, a ridiculous Richard Branson as Danny Ocean strand, featuring Mandela and Kofi Annan on a mission to force Saddam Hussein into exile, feels slightly out-of-place and tonally off.

Amirani has made a personal film, one admirably unhindered by a bias that can often turn projects such as this into a tedious diatribe. Yes, it’s an anti-war film, but it’s much more than that, We Are Many is a statement of our times, even a condemnation of them, and one that should stir you into making your voice heard next time around.