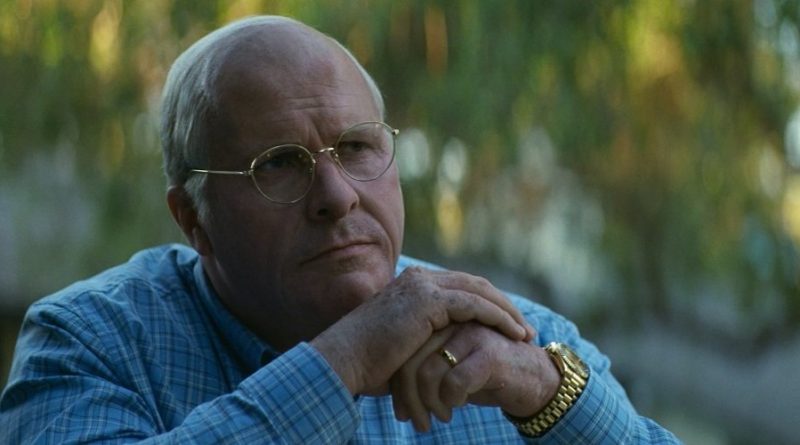 This black satire on the rise and rise of American politician Dick Cheney from writer/director Adam McKay is much easier to follow than his 2015 hit movie The Big Short, which dealt with the US mortgage market crash.

Even so, if you’re not a keen student of the arcane alleyways of American 20th/21st century political history you need to concentrate, as it’s very complex with a lot of changes in style inside the structure.  It is well worth the effort though.

The film covers Cheney’s rise to power from his working class misspent youth in rural Wyoming in the mid sixties, following him as he manipulates himself through the White House corridors of power to eventually become George W. Bush’s vice president with effectively presidential powers and, as the film sees it, the man solely responsible for the Iraq war.  Accompanying and pushing him on his journey is his wife Lynne (strong performance from Amy Adams), who is ambitious in her own right but realizing the limitations the world at that time imposed on her gender, is determined to make her mark as the power behind what effectively becomes her husband’s throne.

You can see why Christian Bale satirically acknowledged Satan, when receiving his Golden Globe award recently.   His representation of Cheney is like an overweight snake, “the spawn of the devil”.  Bale has again gone to great physical efforts to prepare himself for the role, this time gaining a lot of weight to give himself a paunchy middle aged body.   But even as the young Cheney his eyes and jaw are disappearing beneath rolls of fat, giving him a distinctly reptilian air.  More than just an almost spookily accurate physical impersonation though, this is a first class performance within the limits of McKay’s view of the character – a view which allows Cheney few redeeming characteristics apart from his devotion to his family.  And even that is subject to manipulation in the way he uses the fact that one of his daughters is gay.  Cheney’s ruthless ascent, backed by the cleverness of his wife, is reminiscent of Shakespeare’s Macbeth and Lady Macbeth – something which is emphasized at one point in an amusing bedroom scene between the couple played out in Shakespearean iambic pentameter.  Just one of the many little tricks the director plays with the material.

As the plot thickens in the second half, when Cheney and his cronies manipulate the political system to effectively put presidential power into his hands and keep the hapless George W in the dark about their plans for the invasion of Iraq and the lack of evidence about the infamous weapons of mass destruction, you may be reminded of the plotters in Julius Caesar.  This part of the story also features Sam Rockwell as a delightfully dim George W.

McKay’s script is impressively inventive and blackly funny.  Other tricks include a somewhat confusing alternative reality false ending around the middle of film, in which Al Gore wins the 2000 election and Cheney retires to devote his life to fishing and more successfully an “ordinary guy” narrator figure (Jesse Plemens), whose link to Cheney is shockingly revealed towards the end of the film.

Even though MacKay has left a lot of the details of Cheney’s career out, the film does feel a touch overlong.   While the scenes of his early career are interesting and much enlivened by Steve Carell as his mentor Donald Rumsfeld, who is later ruthlessly ditched by his protégé once real power is in the offing, we are though waiting for Cheney to become vice president, which is flagged up at the beginning and particularly for the chicanery which follows on from 911, which is the most shocking and gripping part of the story.

This is an unashamedly partisan view of its anti-hero, which is arguably lacking in depth and light and shade.  There are times when it is almost Spitting Image with real actors.  It is though manna for those who see the Republicans of the era as history’s villains.     And it is above all a strong and entertaining piece of cinema.