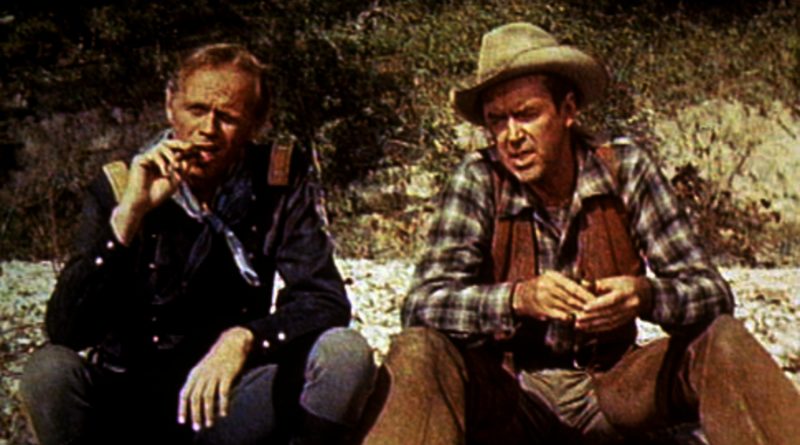 Despite lovely visuals, the airing of controversial racial issues and the pleasure of watching old pros Stewart and Widmark kick back and relax together onscreen, there’s something clunky and phoney about this late western from John Ford.

Marshal Guthrie McCabe (Stewart) is persuaded by his friend, US Cavalry officer Jim Gray (Widmark) to broker the release of several kidnapped settler children from a Comanche chief. But the returned, now grown-up victims no longer fit into the culture they were torn from.

Two Rode Together is often dismissed as a leisurely re-tread of the issues raised in Ford’s monumental 1956 film The Searchers. But, as Tag Gallagher’s thought-provoking video essay extra points out, the last third of Two Rode Together extends the scope of the earlier film by focusing on the ostracism and shame experienced by the returned, kidnapped Elena (Cristal), in a forceful if unsubtle way.

Ultimately, that’s not enough to save the film from moral and dramatic redundancy, because the nuances of the moral dilemma at the movie’s heart are so misplaced. Although it refers to historical events from the latter part of the 19th Century, it is hard not to refer the film to contemporary issues of race and mixed race. Issues that are now essentially non-issues from our perspective. Because everyone knows there are no good reasons for racial prejudice, right?

In other words, Two Rode Together dramatizes a historical prejudice that it holds up as wrong, while denying a related, much more significant, real-world prejudice. The magnificent African-American/Creek-Blackfoot-Cherokee actor Woody Strode embodies this dislocation, as the Comanche warrior Stone Calf. And he is dismissed almost as soon as he appears.

The dramatic redundancy comes from the fact that Stewart, as the hero, is in the second half of the film reduced to stumbling round the moral issue, trying to do the right thing. His character’s efforts come across as phoney, misplaced, irrelevant.

He is much more convincing as the cynical mercenary of the first half of the film, crowing about the wealth and can-do mindset of the ‘independent contractor’ while sneering at the ‘big government’ approach to Native Americans.

Before the moral drama kicks in, a more leisurely pace prevails, as in a remarkable long fixed shot in which Stewart and Widmark spark up cigars and talk trash about women and “men with simple wants”. The scene is almost Method, except that it utterly lacks intensity – and is all the better for that.

Two Rode Together is visually interesting throughout. There are landscape shots with leaden skies, intimacies shot in golden-hour light, nice details like shadows on adobe walls and well-executed group sequences, as when McCabe first rides into the settler camp, or when the settlers file past the captured white Comanche.

Overall, though, the film strains for the moral high ground, in a way that looks really old-fashioned (as opposed to ‘classic’) – just three years before the picaresque onslaught of the amoral spaghetti western.

The Man from Laramie (U) | Home Ents Review