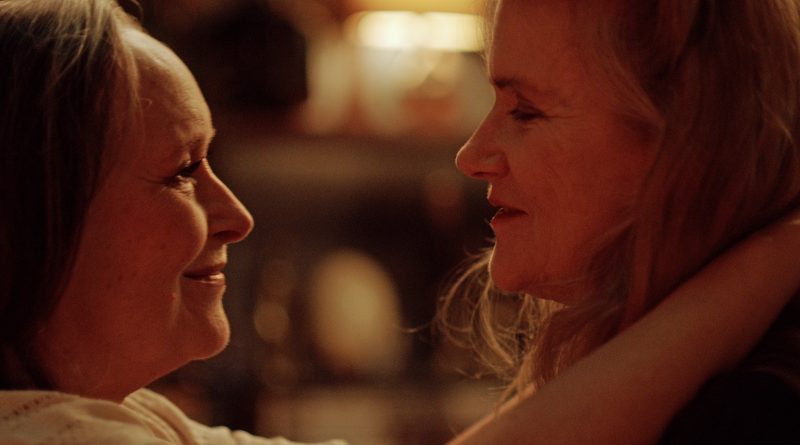 Good film roles for older women tend to be few and far between, particularly ones showing them as sexual beings in love but here we have two such characters in Filippo Meneghetti’s lesbian love story about female pensioners in their seventies.

Nina (Barbara Sukowa) and her neighbour Madeleine (Martine Chevallier), whose flat is on the same floor, have been secretly in love for decades. They set up the adjoining flat arrangement years ago when they first fell in love.  Their friends and family think they are simply neighbours though, not even that close, so they are able to conduct their loving relationship in total freedom and privacy without being subject to other people’s opinions or interference.

Now that Madeleine’s husband is dead, the plan is for them to come out to her family, but at the last moment, much to Nina’s disappointment and fury, she can’t bring herself to do it.  The situation changes again, when Madeleine suffers a stroke.  Her family, particularly her daughter Anne (Léa Drucker) take over and Nina, who is seen as just the neighbour, is now totally excluded from her partner’s care and life.

The first part of the story focuses more on Madeleine and her relationship with her adult children, who labour under the delusion that her marriage to their late father was idyllically happy and that he was the love of her life.   After she is incapacitated and indeed initially in a coma our attention shifts to Nina –  the poignancy of the way she is excluded from her lover’s life not only by the family but later by the unsympathetic carer appointed to look after Madeleine once she is out of hospital and her desperation as she spies on the comings and goings across the hall in an attempt to find out what is going on.  And once the true nature of the two women’s relationship is revealed Anne in particular is disgusted and horrified.

This is a strong emotional story, beautifully acted, which is not only a bit of a ground breaker in terms of its story line, but also highlights society’s overall attitude to older people, in terms of often regarding them as semi helpless, sexless beings who must be managed and filed away in a category marked “old”, while ignoring the richness of life they have lived and are still capable of living.   And It also raised the perhaps disturbing question of “how well do we really know our parents?”