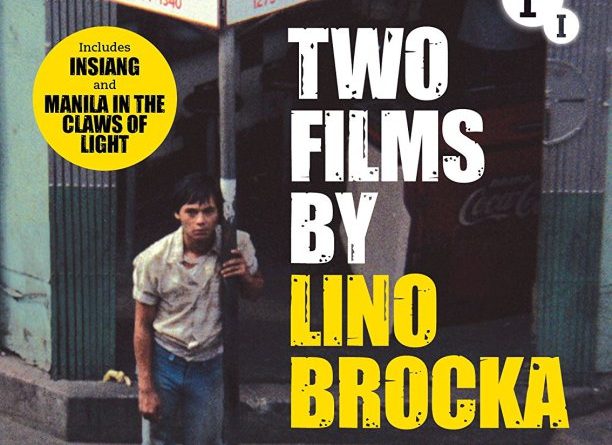 Filipino director Lino Brocka, who died in a car crash in 1991 aged 52, used elemental stories to highlight the harsh social realities of life in his home country. His films have been largely unavailable on DVD and Blu-ray but now, thanks to Martin Scorsese’s World Cinema Project, two of his most famous films have been restored in 4K.

In Manila in the Claws of Light, Julio (Roco), a young provincial fisherman, comes to the metropolis in search of his girlfriend Ligaya (Koronel). He drifts through a series of jobs, making the friends who can help him in his epic quest, which you know from the get go is bound to end badly.

In Insiang, a young woman (Koronel) is living with her mother. When the mother moves in her younger lover, tensions escalate, leading to rape and murder.

Both films feel fatalistic in that they are concerned with the limited options for action that present themselves to the protagonists. The brutal slaughterhouse opening to Insiang does not bode well for a happy ending. The limiting factor is of course the milieu, the crushing poverty of the shanty towns in Manila.

Insiang shows Brocka’s method: the drama of individuals emerges in a very literal, visual way out of a credibly real environment, with images of teeming life in these communities setting up the stories and then crowding their way back into them every now and then. The drama that emerges in this way may be as melodramatic as the heightened colours with which they are told, but it alerts us to the appalling real social conditions that are the backdrop to the story.

In these films, melodrama is that heightening of emotions that gives the social critique some power. Insiang is perhaps too eloquent about her situation and feelings in the scene where she’s hanging out washing and talking to a friend – it’s a scene straight out of a Douglas Sirk movie. But what’s really well judged in these films is the interplay of realism and melodrama: just as you’re thinking ‘okay this is a bit overdone’ there’s a glimpse of raw slum life that sends you reeling. In these glimpses, Roco’s wide-eyed innocence is our perspective too.

Manila in the Claws of Light spells out the Brocka approach, beginning with a black and white documentary reportage section before slipping into colour as Julio’s story begins.

There are issues with both films, that perhaps only time can reveal, but they are quantitative issues. Manila in the Claws of Light is a bit too long, covering too many issues, and its flashbacks are overly sentimental; Insiang is too melodramatic. But I’m being picky. Restore some more Lino Brocka films, please, starting with 1979’s noirish Jaguar.

Two Films by Lino Brocka is out in a dual format edition from 20 March 2017.