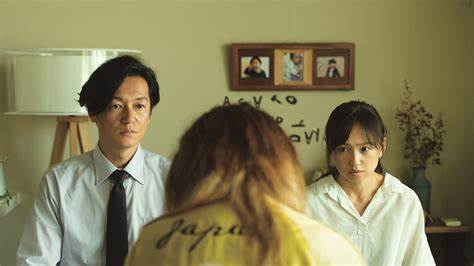 Young married couple Satoko (Hiromi Nagasaku) and Kiyokazu (Arata Iura) are very disappointed when in spite of all their efforts they are unable to conceive.

When they see a programme on TV about an agency called Baby Baton which caters for pregnant mothers and couples who want to adopt by matching up the baby and childless couple, they feel hopeful. The agency stresses that one of the couple must give up work to look after the child full-time. The couple are hopeful and we later see them receive a baby boy from a most unhappy teenage girl Hikaru (Aju Makita) – the formal handover takes place in the presence of the girl’s own shame-filled parents.

Five years later, when the couple are coping as well as most parents with a small child, who at the start of the film is in trouble at his school where he has been (wrongly) accused of hurting another child, Hikaru phones out of the blue to say she wants to see them. A somewhat different young girl appears – no longer shy and crying but angry and demanding that they give her the baby back or pay her money. She seems so different that the young adoptee parents even question whether she is the same person.

The director then shows us the story of Hikaru and how she came to have and then hand over her child and her subsequent life.

While we can pick holes in the way the film unfolds, it is an interesting concept, told with sensitivity and care. Director Naomi Kawase fills it all beautifully with lots of attractive sea and woodland scenery.

The acting is competent with the actors showing their emotions in a quiet but realistic-seeming way. We can believe in their portrayals. There is an especially moving performance by Aju Makita. The child is very cute.

It’s a quiet reflective film that attempts to show what is a true mother.