After passing through a chemical spray quarantine checkpoint, a farmer hits a deer – a deer that then jerks, cracks its bones, and gets right up off the blood-splattered road. There’s been a chemical spill nearby, and something’s up…

Elsewhere, after realizing he’s in danger of being an absent father, workaholic Seok Woo (Gong Yoo) reluctantly agrees to accompany his adorable daughter Soo-An (Kim Soon-an) on the train ride to Busan, where her mother – his ex – now lives.

Seconds before the KoRail train departs, a sweaty teen stumbles onboard – she’s been bitten by something, and when a kindly uniformed conductor asks her what’s wrong… well, we’re off to the zombie races.

A collection of random passengers finally end up together in various degrees of safety, locked in safe carriages or toilets while the rabid, snarling beasties claw at the doors – and the rest of Korea seems to be under attack as well.

Among the passengers are a beefy guy with his pregnant wife, an elderly mother and daughter, a school team of baseball players, a seemingly-homeless guy, and a pushy businessman: who will make it to freedom, and will they ever get off the train?

Mixing Snowpiercer (another Korean film) with zombies, this fast-paced and surprisingly emotionally effective thriller breathes a bit more life into what’s an exhausted horror sub-genre due to effective direction from writer/director Sang-ho Yeon. The action scenes, almost when you think they’re over, get even more dangerous and exciting (the blazing train that crashes towards the end, for example).

There’s plenty of symbolism and metaphor here too: the evil corporate man sacrificing everyone else to save himself, the multi-generational elements, the idea of even the possibly-infected being outcast by braying mobs, the rich versus the poor, and so on.

More than that though, the detail – the bodies in the river water, the carriages full of trapped, snarling zombies – and those zombies themselves, throwing themselves like lemmings through windows and crushing and trampling over each other (remind you of the holiday sales, perhaps?).

As the cast get picked off one by one – usually in an act of heroism – we wonder who is going to make it to the city of Busan, which is said to be safe and guarded by the army – but even then there’s a last twist to make this stand out from the bloody crowd.

Train to Busan has made close to $80m worldwide in just a few weeks, and the same director is behind an animated story called Seoul Station, also due out this year, which is a prequel to this story.

For now though, the film version – a hit at Cannes earlier this year and in receipt of praise from critics of all stripes – is worth catching when it comes to a screen near you. 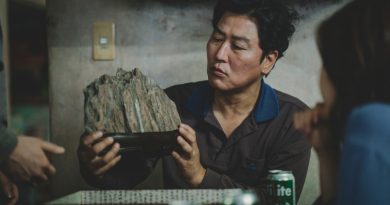