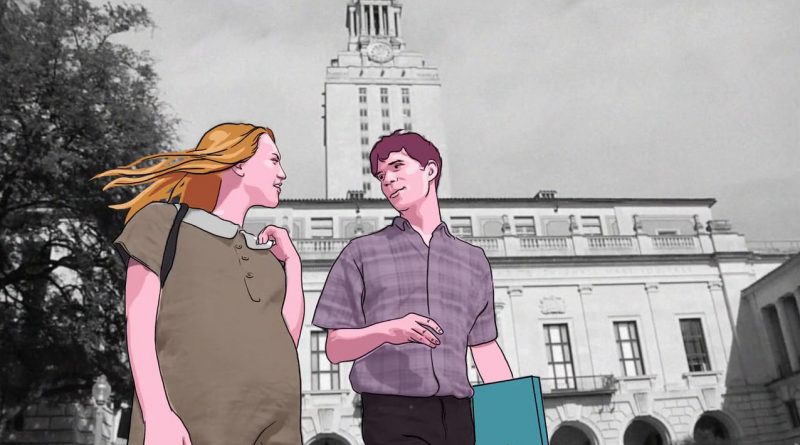 Not exactly a documentary, nor indeed an animation film, this movie combines the genres. Using the technique of roboscoping, actors in live-action scenes are used as the basis for the animation.

Mostly in black and white, there are occasional startling sequences in colour. There are also times when real people involved in the horrific incident comment now on what happened at the time of the shooting.

The film becomes a combination of telling a story, recalling a recent historical event and commentating on what happened in the awful day, 1 August 1966 when a lone gunman, later identified as Charles Whitman, began shooting from the twenty-seventh floor of the Clock Tower at the University of Texas. He kept firing and killed 16 people. Whitman took an elevator up the tower carrying a whole lot of weapons and fired seemingly at random. At the time – some 50 years ago – this was a new type of crime. This film full of action is a documentary re-enacted by actors showing what happened on the day. The actors are not well known but depict the people caught up in this terrible tragedy really well. They include those who acted so bravely in rescuing the victims.

We see the young female student whose friend is killed and she lies next to her for over an hour pretending to be dead until she is saved. We observe, too, a pregnant woman, Claire Wilson (Violett Beane) and her savior, Rita Starpattern (Josephiene McAdam) who ran out from safety and lay beside Claire on extremely hot concrete, talking to keep her conscious until help was able to get through. The real young man who rescued the pregnant woman tells his story later. Allen Crum (Chris Doubek) also tells his story of rescuing someone bleeding badly then going with two policeman to accost Whitman – who was still firing – on the Observation Deck. We hear from Brenda Bell (Vicky Illk), who tells us how she was unable to move on the dreadful day, “I was a coward,” she confesses

The film is directed by Keith Maitland and is based on an article by Pamela Colloff in Texas Monthly. The director’s use of different modes to tell the story brings the day to life. It is interesting that the film chooses not to tell us much about the gunman. Whitman’s story is obviously of interest as he shot his mother and wife the night before the huge killing-spree. This is never mentioned as the decision has been made not to sensationalise the killer.

The movie is beautifully shot and the craftsmen involved are of the highest order. It’s a tale that is worth telling and has been dealt with sensitively and most professionally.