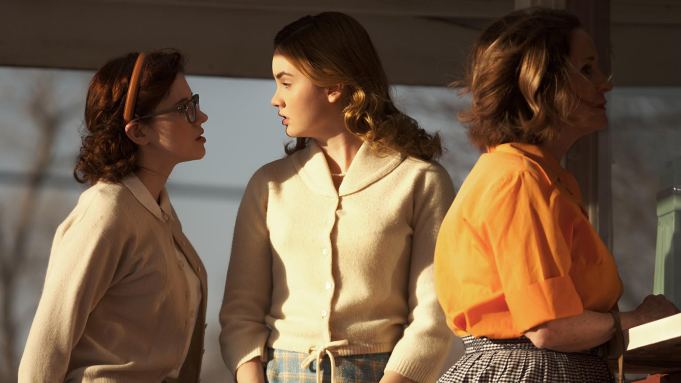 Starting out a like a coming-of-age film, this changes into something more sinister. Iris (Kara Hayward) is shy and awkward, laughed at by the girls and teased in a horrible manner by the boys at her school. The boys bully and humiliate the ungainly girl. It all suddenly changes when newcomer Maggie (Liana Liberato) appears on the scene. She is new to the small town of Wakita, Oklahoma, and is forward in her manner. She takes Iris under her wing and gradually changes her by first getting her new friend to take off her glasses and wear more suitable clothes for a girl of her age – a teenager in the early 1960s. They become close buddies.

It is a small town with mean spirits amongst the population. Maggie boasts that her father is a photographer for Life magazine when actually he works for a very ordinary agriculture magazine. Maggie’s home life is none too easy as the family blame her for some past misdemeanor. Maggie’s unsympathetic, religious father, Gerald (Tony Hale) and his wife, Grace (Malin Akerman) have moved to Wakita to get Maggie away from bad influences. Subjected to physical abuse by her father, who beats her when she stays out late, Maggie has an unhappy home life. Iris, too, has a difficult mother, Francie (Jordana Spiro), who drinks too much and puts her daughter down. Also in the mix is a hairdresser, Hazel (Adelaide Clemens) who keeps her private life to herself. She shows affection towards Maggie.

The whole feel of the film changes in the second half when a lesbian relationship develops – but not in the way we are expecting. The deeply conservative small town is rocked by the scandal caused by this coupling.

Cinematographer Andrew Reed shows us the wide-open land of Oklahoma, and we see Iris walking along a road that stretches endlessly. Apparently, the film was originally shown in black and white. This is surprising as the version we see is full of bright colours. The colour and particularly good production values give the movie the right feel for period it is set in. A well-written script by Bradley-Colleary gives the two girls an equal chance to display their honest approach to their characters. And the actresses, Kara Hayward and Liana Liberato, show their versatility. Adelaide Clemens, too, gives a low-key portrayal of the hairdresser with hidden desires.

Maggie Stephens has directed a film which deals with the themes of female friendship, lesbian romance, coming of age and parent-child relationships. While I always prefer a neat ending, Stephens has opted for something different. In many ways the movie has an old-fashioned feel to it, but that only makes it even more special.

To the Stars is on digital platforms including ITunes, Amazon, Virgin, Chili now.