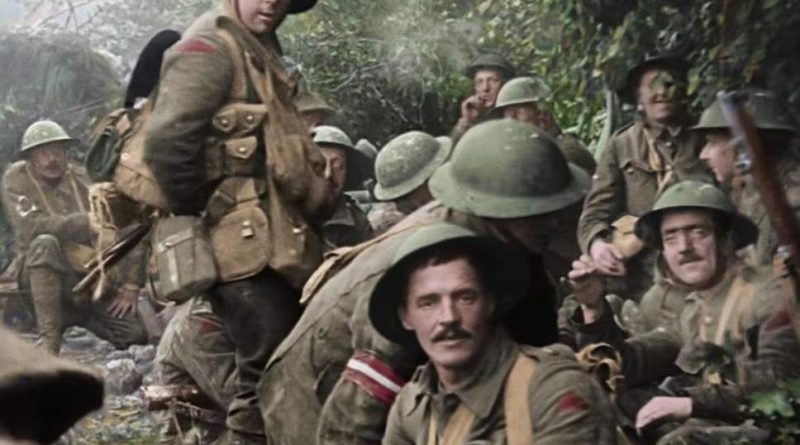 Peter Jackson’s documentary about the men who fought in World War I is a triumph on several levels.

Technically it is amazing in the way it has used 21st century film technology to bring vintage footage of the war to life in terms of the contemporary cinema experience; creatively it is a triumph in the moving and gripping way it tells the story; and personally for Jackson it is a tribute to the grandfather he never met, who fought in that war and died aged 50 as a result of that experience, before his grandson was born.

It all started when Jackson was asked to create a modest half hour documentary to mark the armistice centenary using the rich store of archive material in the Imperial War Museum.  The museum should perhaps have realised that the man who turned one small story about a hobbit into three cinematic epics would deliver rather more than that.

Jackson took a small sample of the footage back to New Zealand and realised that using today’s digital technology he could restore the jerky “Charlie Chaplin world” deteriorating footage to modern standards.  He then used colourisation techniques to bring that footage to even more vibrant life, used lip reading techniques and actors to give voice to the characters and sound effects to give the film a dramatic soundtrack and raided archive voice recordings of WW1 veterans’ memories to act as his narrators.

The film tells the story of the young men, many of them boys of 15 or 16, who fought on the Western Front, taking them from the patriotic fervour of joining up through the tough training period and then into the war itself.  It doesn’t stint on the horrors of the life in the trenches – the bad food and primitive sanitation; the rats, lice and the flooding underfoot; the exploding shells and relentless gun fire from the other side and the graphic and distressing footage of the wounded and the dead.  But we now see these once distant and misty figures as lively young men at the beginning of their adult lives, joking, laughing and sometimes self conscious at the novelty of being in front of a movie camera for the first time, as they prepare to go into a battle, which will leave none of them unscathed and many them dead.  Look closely.  One of them could be your grandfather or your great grandfather.

The official war footage did not of course extend to coverage of the carnage of actual battle in no man’s land.  Jackson has movingly recreated this with close ups of the butchered corpses and body parts of men and indeed horses, laced with vivid war artists’ drawings from publications of the period, the voiced memories of the veterans and that terrifyingly authentic sounding soundtrack. It is a brilliant piece of editing and storytelling.

Although the war has been recreated many times in fictional films, this is the first time it has been brought so vividly to life by the men who actually fought it.  One remarkable aspect of the story we see towards the end of the film is the empathy many of the soldiers have for their opposite numbers in the German army, when captured.  We also realise from the veterans telling their stories that our popular perception of these young soldiers as deceived, cannon fodder victims is perhaps erroneous. They are far more aware than that.  Though as Jackson himself has said, the unheard voices are those of the dead.

The film is being shown in cinemas throughout the country on Armistice weekend, 9th, 10th and 11th November.  And although you can see it on the telly for free on Sunday, if you are able to, get to a cinema and experience it in 3D and stereo sound, plus an enlightening Q and A session with Jackson, which was recorded at the recent London Film Festival.  Copies of the film have also been distributed to secondary schools throughout to country.