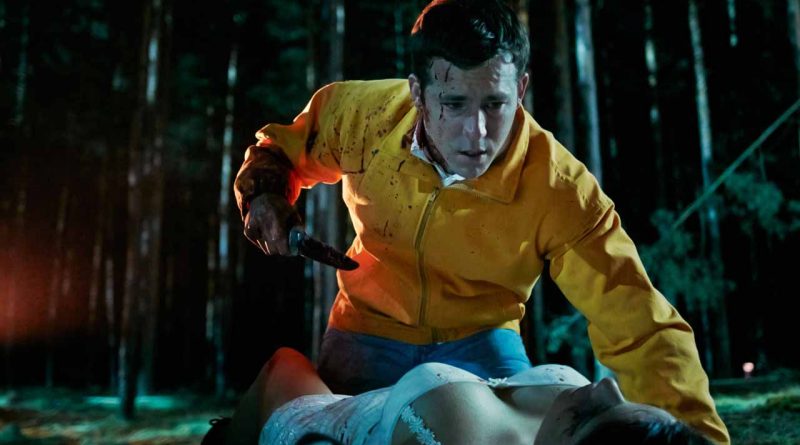 Marjane Satrapi, perhaps best known for her Oscar-nominated animation Persepolis, brings a stirring sense of duality to this quirky, off-tone horror-dramedy about an inadvertent serial killer suffering from mental health issues stemming from a traumatic childhood. The screenplay from writer Michael R Perry sat on the Blacklist – a polled list of the industry’s favourite unproduced scripts – a few years ago, and it’s easy to see why.

The way that the story of Jerry (Reynolds, clearly relishing the role) unfolds is well-told by Perry, and well-spun by Satrapi, following a mildly directionless first act that takes some time to explain itself. The tone and the colour palette are off from the start, a little too light and bubbly; this can make for uncertain viewing as we try and figure out exactly what kind of film we’re watching here. The reason behind the assured stylistic choices are soon made clear, as dual colour palettes represent Jerry on his meds, and off them. When reality sets in and the “normalising” drugs take effect, the world takes on a dingy, sombre tone that makes Jerry’s decision to stop medicating highly sympathetic.

Once the tone is figured out (and it’ll be a Marmite situation for those watching), the film makes for great viewing. The biggest gimmick the film has going for it is the fact that Jerry talks to his cat, Mr Whiskers, and dog, Bosco – and they talk back. Reynolds provides a hilarious Scottish brogue for Mr Whiskers, and the exact kind of dopey, relaxed yankee accent you’d expect from a dog. There’s something to be said for the cat being the devil on Jerry’s shoulder, and Bosco the angel – there’s a lot of religious talk of angels and such within the film as it stands, so it’s an obvious leap.

The interactions make for not only great comedy but also an intriguing look at a horribly fractured mind. Deep down, Jerry knows both of these anthropomorphic voices are actually him, but simply can’t face up to his own culpability – regardless of the fact that he really doesn’t want to hurt anyone. Indeed, two of the people he does hurt are the result of genuine accidents borne out of intense, high stakes situations. One lesson to be learned here is, don’t run through the woods with a knife.

Gemma Arterton gives good office sexpot vibes in the first stage of her performance, and gives an equally good take on the old severed-head-in-a-fridge chestnut (this makes perfect sense within the context of the film, don’t worry). Anna Kendrick, as Lisa, appears in full-on typecast mode – but when the type is the adorable, friendly, sees-the-good-in-everyone mould, it works and honestly can’t be faulted. Kendrick’s character especially is entirely sympathetic as she doesn’t understand how compromised the mind of her crush, Jerry, is.

For his part Jerry also finally finds a good thing in his life in the form of Lisa, and it puts the viewer in an actionable position where it’s up to us to decide whether Jerry is deserving of this or not – does his mental illness absolve him of dastardly deeds? Does the accidental murder of Fiona (Arterton) mean the rest of his life must be written off, offered up in sacrifice to the gods of crime and justice? Probably. But Reynolds makes Jerry so damn sympathetic that it’s almost a hard decision to make.

The Voices is an intriguing blend of horror, comedy and drama that offers up light chuckles to entertain and horrific moments that embed themselves in your mind’s eye (a well-placed shot of one character’s brain injury leaking blood into their eye sockets as they close their eyelids is not only chilling but extremely saddening). For the average movie-goer it’ll be a tough watch, and it’s most definitely not for everyone. Satrapi and co. would probably do better with the general public if they decided on which movie they were making; as it stands the blend of genres makes the film slightly inaccessible for everyone bar those who “get” it – and those people may just be few and far between.

Extras: A slightly bizarre fly-on-the-wall behind the scenes look, as we almost silently watch several scenes being filmed, probably doesn’t land as the producers of this home entertainment release intended. There’s a wealth of other features to be enjoyed here, however; some deleted scenes which round out some of the set-up – you can’t help but feel like they should have been in the final cut. Footage of a scare prank from a UK cinema isn’t as funny as it could have been, but the footage of Ryan Reynolds doing his voice recording for Jerry’s pets is good fun. A series of interviews give good background on how everyone got involved, including producers. Mostly just fluff, as these things are wont to be – but it’s all authentic. There’s also a bunch of animatics which are just frankly super creepy. A good range of features all in all, worth the price of admission.

The Voices is out on DVD, Blu-Ray and Limited Edition Steelbook now.