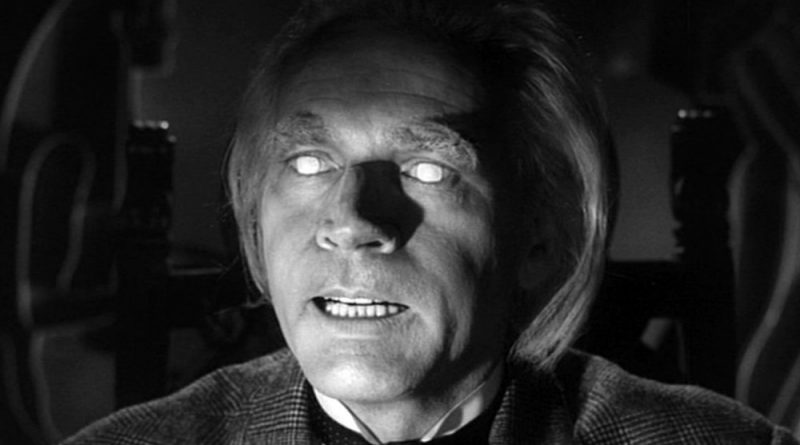 Here is proof that ‘old-school’ can still excite. The Thousand Eyes of Dr Mabuse is the last film by one of the great directors of the first 50 years of the industry. It’s a technically excellent, old-fashioned thriller, shot through with striking elements that show its pedigree.

The Hamburg police are discombobulated by a crime wave across the city. Kommissar Kras (Frobe) identifies a common factor among the crimes: many of the victims stayed at the posh, Nazi-era Luxor Hotel.

There may be no apparent urgency to the police procedure but the stakes are high in the background: an American industrialist is in the city to show investors plans for a new nuclear technology.

Further police investigations suggest the malign machinations of evil mastermind Dr Mabuse, last seen being dragged off to an insane asylum at the end of Lang’s 1933 film The Testament of Dr Mabuse.

Don’t expect many ‘meta’ elements here. The Thousand Eyes of Dr Mabuse is a straight-ahead, slightly daft, criminal mastermind movie. Lang knows how to tell a story and the film is propelled forward by some textbook instances of the director’s art.

Firstly, there’s some razor-sharp editing from one scene to another, with the audio from the previous one segue-ing into the next scene.

Secondly, the characters drive the drama, and the stranger they are the more that fits the mood of the film. Exhibit A is Werner Peters’ astrology-obsessed insurance salesman, although Wolfgang Preiss’ sinister psychic medium Cornelius is also worth the price of admission.

Thirdly, as well as propelling the story forward, there is always a question mark surrounding these larger-than-life characters. Whose side are they on? This helps create a paranoid, gripping mood.

Finally, that mood is intensified by the story’s deployment of surveillance techniques. Not only Mabuse’s hidden cameras (the 1000 eyes of the title) but also, to give the most striking and extended example, the one-way mirror that allows the hero to watch his lady friend undress. It wouldn’t be a Fritz Lang movie unless there was a voyeuristic, libidinal investment in all that circa 1960 technology!

There’s lots to like about The Thousand Eyes of Dr Mabuse, although this restoration will appeal most to the great man’s fans.