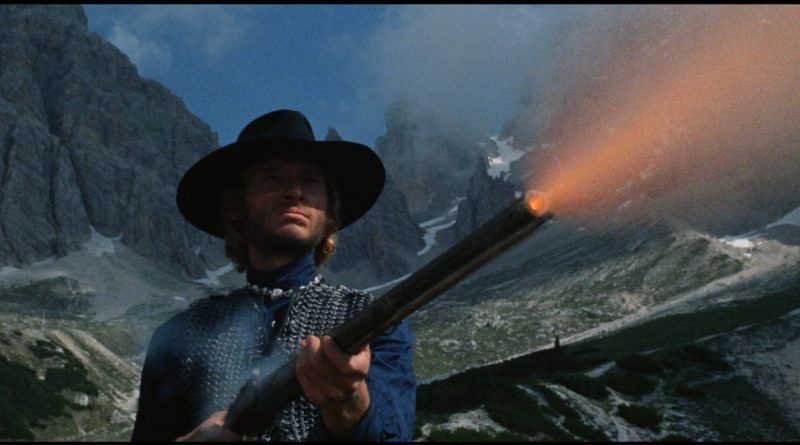 A prime slice of “baguetti western” from the legendary director of The Great Silence, Django and Companeros. This 4K restoration highlights the unique look of Sergio Corbucci’s great westerns.

Fish-faced French rockstar Johnny Hallyday is Hud Dixon, a chainmail vest wearing gunslinger anti-hero seeking revenge for the lynching of his brother by the townspeople of Blackstone.

Hud’s brother was employed by the Pollicut bank and tasked with accompanying a huge chunk of cash to a neighbouring town. The money went missing, a posse was sent out, the brother was captured and killed. But the money was nowhere to be found.

Blackstone sheriff Gedeon (Moschin) knows that the town’s business people, led by widow Pollicut (Fabian), are ruthless in their pursuit of money and power, but he is honour bound to protect their interests.

Hud is also conflicted as he has in the past ridden with Mexican outlaw El Diablo (Adorf). El Diablo just wants to get his hands on the money. As do a trio of annoying, poly-morphously perverse hippies who turn up like proverbial bad pennies.

Eventually, all parties converge on Blackstone for a big gundown.

Don’t be put off by the presence of Johnny Halllyday. He is actually pretty good here, with his taciturn manner, his steely blue eyes and his face full of tightened curves. Moschin and Fabian are classy co-actors, focusing the drama whenever they are on screen.

The only acting letdown is Adorf as El Diablo. Spaghetti westerns usually achieve a loser’s pathos through the character of the Mexican outlaw but it is utterly lacking here. He is all jocular bombast and, later, rapine craziness.

Sergio Corbucci has a huge reputation for his westerns, especially The Great Silence, Django and Companeros. His signatures are downbeat endings, sudden outbursts of brutal violence and the aesthetics of the “baguetti western”, in other words French-Italian co-productions that were filmed in alpine Northern Italy rather than Almeria, Spain.

All are here in spades. The object of everyone’s desire is less graspable at the end of the film. There’s a completely unexpected stabbing, a rape which transitions bizarrely into a shoot out and a striking scene of mass nudity at the close.

Above all else, you should watch this film for the way it looks. Corbucci and cinematographer Dario di Palma (who worked on Antonioni’s Red Desert and Fellini’s The Clowns) use a blue and grey palette for landscape shots, which makes sense given the northern Italian locations. There’s a couple of lovely scenes in a hillside cemetery that looks distinctly alpine; even the stone-strewn rivers and foothills look very European.

An accompanying essay in the limited edition run tells the history of the baguetti western. All versions include audio commentary by Brit film maker Alex Cox, who championed Corbucci in the 90s. There are French and Italian audio versions as well as an English dub.