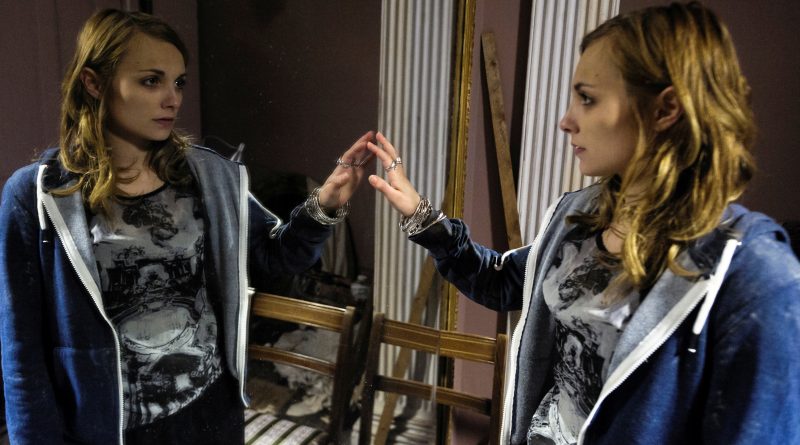 The Sleeping Room will go down in history as the first part-equity crowdfunded British feature film, and the thoroughly modern financing method stands pleasingly at odds with the Victorian ghost story at the film’s core.

We meet Blue (Leila Mimmack), a down-and-out young call girl working the streets of Brighton, as she heads out to visit her latest client; the striking, but desperately lonely, handyman Bill (played by the really rather good, Joseph Beattie). But the flat Bill’s working on seems to be hiding secrets behind its antique paneling; secrets that hit Blue particularly close to home.

It’s an effective set-up and the mystery unfolds with just the right dose of creepy old pimps and vulnerable streetwalkers. All the Victorian elements are handled well, in fact. The dusty set dressing is highly effective and the Guillermo Del Toro-esque fascination with the minutiae of clockwork is brilliant, as is the mutoscope footage.

The film does drop off slightly when the Victorian mist subsides to reveal an initially rather grubby, but increasingly attractively lensed, Brighton. The real world drama is set up to mirror the development of the mystery, which works well enough, but doesn’t deliver in the same way. These scenes also tend to come across as unfortunately soapy, which may be a result of the minimal budget. Also off-putting are the weak performances from some of the side characters, and they really stand out against the stronger actors at the film’s core.

The one area that continues to belie the budget, however, is the London Metropolitan Orchestra’s haunting work on Paul Saunderson’s impressive score. Even when everything goes to pot during the overblown finale, the musical accompaniment remains remarkably light on its feet.

The film also does a good job of lulling the audience into a false sense of security, resulting in a first jump that comes totally out of the blue. That does go on to prove troublesome, however, because the unexpectedness of the first scare is never matched. And, we’re ultimately left with a decidedly un-scary movie, which is not at all what we want from a ghost story.

The Sleeping Room is a film that looks forwards (it’s distribution method), whilst never resisting the urge to look back (its influences), and that’s to be commended. It may not deliver quite enough scares for the target audience, but it has a strong sense of atmosphere, at times, and stands as a promising debut from filmmaker, John Shackleton.

Also on the DVD are a solid, if uninspired, set of bonus features. Most notable is 6th Sense, the quietly effective short film that went on to inspire the feature. Less worthwhile, however, is an unfortunately drab Frightfest interview with Shackleton. And, then, to finish off; a couple of behind the scenes videos, including a brief look into Olaus Roe’s effective VFX, and an attractive set of stills, fittingly accompanied by Saunderson’s score.

The Sleeping Room is out on demand and download on 27 April and on DVD 11 May.