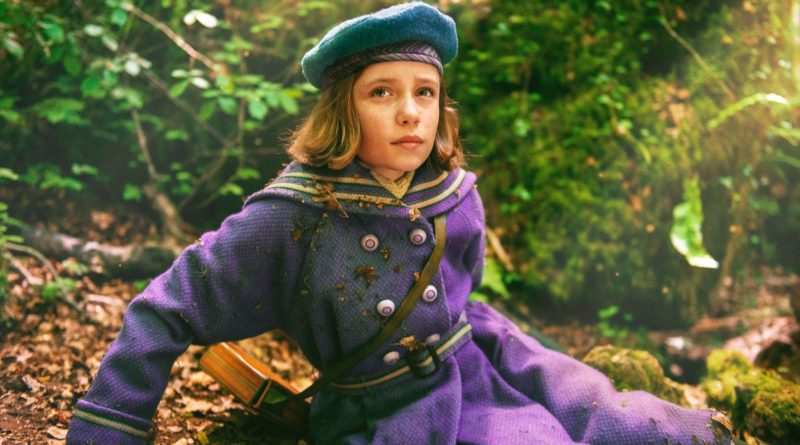 Despite its PG certificate this latest version, which has a slightly different take on Frances Hodgson Burnett’s classic tale, is perfectly suitable for adults.

The producers and the writer (Jack Thorne) haven’t modernized the story as such but they have moved the time from its original early 20th century setting, when the novel was written, to 1947 on the eve of the partition of India.  This gives us a grippingly dramatic opening sequence of Mary (Dixie Egerickx), a terrified little girl hiding in her bedroom and comforting herself with her shadow puppet toys, while the sounds of escalating violence can be heard outside.  It emerges that her parents have died in hospital of cholera, her ayah and the rest of the staff have disappeared and Mary has been left forgotten and alone in the house.   It’s a scene which immediately engages our sympathy for the child, who is initially pretty unlikeable – arrogant, demanding and entitled.

These are all qualities which don’t endear her to her new guardians, when Mary is shipped off to England and the rambling and gloomy manor house home of her uncle Archibald Craven (Colin Firth), who is a distant and emotionally frozen figure, still mourning the death of his wife, who was twin sister to Mary’s mother.  He puts Mary into the steely charge of his strict housekeeper Mrs Medlock (Julie Walters), who orders this strange child to stay in her room and not go poking about.

But Mary of course does just that and discovers Archibald’s son Colin (Edan Hayhurst), a petulant, isolated invalid, confined to his bed by his over protective father.  These two initially unlikeable children form an uneasy and secret friendship.  Then on her solitary walks through the grounds Mary discovers the secret garden of the title, an apparently magical place where the sun shines brighter and plants as exotic as those in India are flourishing.  The garden also leads her to a new friend Dickon (Amir Wilson) and ultimately a healing and reawakening for Mary, Colin and Archibald, as the secrets of the past are revealed.

The story is told very much from Mary’s point of view – a disturbed child who felt rejected by her mother. Dixie Egerickx gives a remarkable performance in what is a complex role.  The psychology all rings true as she discovers the truth about her family – the twin sisters who were so close and the secret garden itself, which effectively reveal to us the reasons for Mary’s disturbed personality and its healing.   At the centre also are her friendships with the two boys and particularly how she and Dickon open up the world to Colin through the magic of the garden. It’s a magic which exists in the children’s perception, as we see in a very effective scene where, as they walk through the garden, the flowers burst into bloom and the butterflies on Mary’s pinafore seem to come to life.

Another important element in the story telling are the sets and locations and the way cinematographer Lol Crawley films them.  The contrast between the gloomy, chilly, rambling mansion with its long corridors and grandiose staircase, the mist of the moors outside and the warm sunshine colours of the garden, which match and exceed Mary’s memory of India are all almost characters themselves.

The adults don’t get much of a look in really though Firth has some good moments towards the end of the film when the full extent of his grief is full revealed.