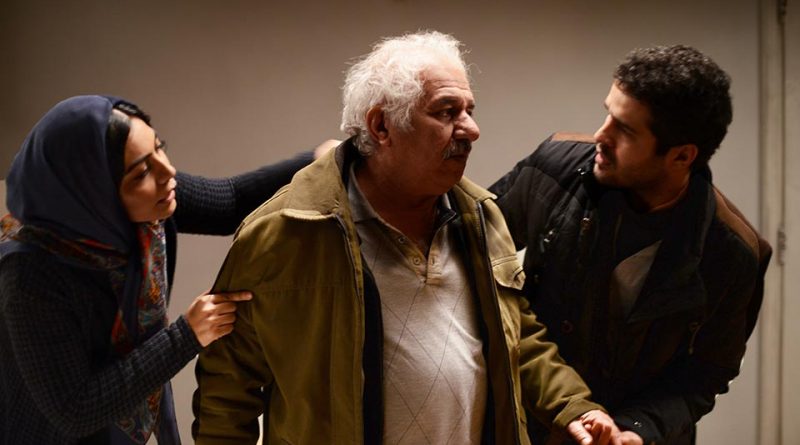 Along with his much admired film “The Separation”, Asghar Farhadi’s “The Salesman” has been highly praised and nominated for awards, including like that previous movie winning the accolade of Best Foreign Language Film Oscar.

The title refers not to the profession of the main character, Emad Etesami (Hosseini), who is a teacher and part time actor but to Willy Loman, the role he is playing in a local production of the Arthur Miller play “Death of a Salesman”.   In the course of the story we find certain parallels between Emad and Willy – but not always the obvious ones.   For a start Emad and his wife Rana (Alidoosti) are both somewhat younger than their characters – she plays Willy’s wife in the play within the film – and they need the help of skilled make up artists to convince.

This is not though a story about theatre but about personality.  In the dramatic and disturbing opening of the film the apartment block where the couple live is semi destroyed by what seems to be an earthquake – and possibly incompetent  building.  They have to move out quickly but fortunately a colleague at the theatre offers them use of a flat he owns.  The disadvantage is that it is filled with the previous owner’s belongings and more importantly her way of life – it appears she made her living as a prostitute.  And when one evening Rana lets someone into the flat, thinking it is her husband, and is then assaulted by the stranger, who perhaps mistakes her for the previous resident, Emad becomes obsessed with finding the man who violated his now traumatized wife and avenging her.   In the course of his mission the cultured and upright literature teacher reveals an unexpectedly cruel and vindictive side to his  personality and Rana’s assailant, when Emad finally confronts him, becomes the vulnerable victim.  Like with the apartment building that was his home, trauma reveals the cracks that can destroy the whole structure.

These final scenes are gripping and morally challenging, and the tension of the actual assault, details of which we are mercifully spared, is still appropriately nerve jangling.  But overall the film, while intriguing throughout, lacks the absorbing qualities of “The Separation”.   Emad and Loman, the character he is playing onstage, share  the same powerlessness and sense of frustration, in that Willy feels a failure because he has been unable to give his wife and family the good things in life while Emad questions his manhood because he has failed to protect his wife from assault.  The other parallels between the characters as a dramatic device however are not always clear and the plotting of the film at times appears somewhat contrived.  Farhadi made a stronger dramatic point in his refusal to attend the Oscar ceremony than perhaps he does in this film.