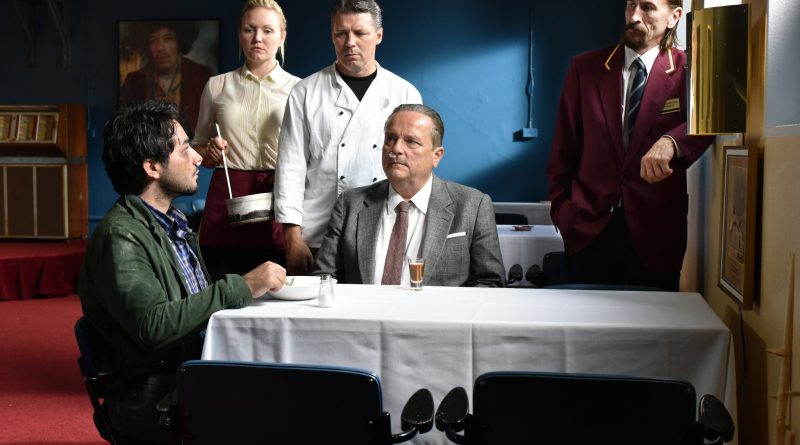 Reviews
May 25, 2017 Carol Allen Sakari Kuosmanen, Sherwan Haji, The Other Side of Hope

Finland is not a land with which many of us we are very familiar.  Although geographically close to the Scandinavian countries, it is not Scandinavian and the Finnish language is totally different, being related to Hungarian and Estonian.  So Aki Kaurismäki’s film gives us some interesting insights into the country.

The film follows two characters – a travelling salesman Wikström (Sakari Kuosmanen),  who walks out on his job and  alcoholic wife when he wins a fortune at poker and buys a failing restaurant, whose dish of the day is boiled potatoes and an opened tin of sardines and Khaled, a Syrian refugee (Sherwan Haji), whom we first meet in a startling shot as he emerges from the coal in the hold of the ship on which he has stowed away to get into Finland in an image reminiscent of the creature from the Black Lagoon.

Wikström’s journey is largely darkly comic.  In the wordless but totally telling scene when he leaves his wife, you can see why this marriage is not working, as she sits there,  hair in curlers and chain smoking and dumps her wedding ring in the overflowing ashtray.  The efforts of Wikström and his tiny and understandably dour, underpaid staff to make the restaurant work by incompetently trying out different cuisines include substituting herring in the sushi when the salmon runs out, which doesn’t really cut the mustard as it were .

Khaled’s story has a more serious and angry tone, as he applies for asylum, is processed by a hostile bureaucracy and put into a depressing reception centre, where he is befriended by a fellow refugee, who is from Iraq and advises him to keep a cheerful face as it is “the melancholy ones are always deported first”.  And even though in an effort at ingratiation with those interviewing him about his asylum bid Khaled says the reason he wants to say in Finland is because “it is a good country with good people”, that is not borne out by the treatment he receives at the hands of both that same bureaucracy and the racist bullies on the street.

Eventually Khaled and Wikström’s paths cross after exchanging blows in a punch up and Wikström allows an unexpected humanity to make its way through to the surface of his grumpy persona, as he shelters Khaled in his restaurant and helps him to obtain false papers.  The ending of the film is though ambiguous.

Haji with his melancholy brown eyes is memorable as Khaled and the film is an interesting mixture of offbeat humour and liberal anger at the way refugees like Khaled are treated.  As for the impression the film gives of the Finns, they appear from this to be a largely gloomy lot who make the Swedes look positively cheerful – a society rich in vodka, cigarettes and existential gloom, lightened occasionally by a bit of rock and roll or folk music played in the streets and bars.   Technology too appears to have passed this society by.   The police officer processing Khaled’s initial application is working on an old style manual typewriter.  They do have heart though.