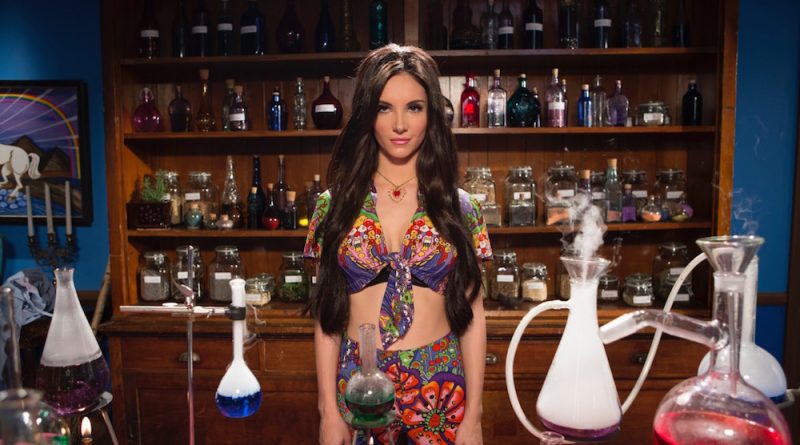 A glorious Technicolor lovebomb of a film, lobbed at the intricacies of desire, The Love Witch is wicked fun.

Elaine (Robinson) is a glamorous modern-day witch who lives in a cinematic timewarp, for her hair, makeup, clothes, car, apartment – even her smokes – all sing out ‘early 70s exploitation film‘. On the run from a dead husband in San Francisco, she heads north along the coast and rents an incredible Domestic-Gothic pad in Humboldt County, northern California.

Elaine tells new neighbour Trish (Waddell) her love philosophy: being a woman is all about looking great for the right man, satisfying all his desires. But finding Mr Right is a problem, which is why she became a witch: to know how to cast spells and cook up love potions that will bring Him to Her.

There are at least two interconnected catches to Elaine’s worldview: she is harbouring much more ambivalent desires; and her potions have terrible consequences, as a series of lovers/ victims are about to find out.

Making The Love Witch was a labour of love for Anna Biller, who wrote the screenplay, produced, directed, edited and designed the production including the costumes. She shot on 35mm and has emulated the over-rich colourings of Technicolor to glorious effect – every second of the film had me squealing with nostalgic pleasure at the colours.

We’re pretty used to pastiches of and homages to the brassier cinema of the 70s – the former tend to be played for laughs, the latter foreground the hyper-stylised elements that have fallen out of favour since. What is so affecting about The Love Witch is that it plays out above the laugher threshold. Although the characters are cardboard and the situations could easily come from an early TV movie, the film isn’t just arch and funny. Perhaps it isn’t cardboard at all? Perhaps the characters are ‘just’ pathological narcissists with full body and character armour on? Perhaps there are unpleasant truths about ourselves bubbling out from under the perfect product here? If Russ Meyer and John Waters set the tone here, it’s easy to feel an undertone of Hitchcock, Sirk and Fassbinder too.

As a film culture, we’ve fallen so far from the visual splendours of Technicolor – not to mention the other aspects of the retro production design here – that The Love Witch looks and sounds truly exotic. Exotic, yes! Perhaps moreso than the ‘original’ thing: I watched George A Romero’s Season of the Witch (definitely an inspiration for The Love Witch) again recently and it looked so grimy and full of horrid colour clashes. The Love Witch is proof that the best ‘retro’ films displace us once again into our own technologically enabled futures.

The soundtrack is also exotic, with excellent use of giallo-era Morricone and other Italian composers of that period, as well as some funny (ha-ha) faux folk for pink tearoom scenes and a bizarre fairytale sequence.

The Love Witch displays some spot-on gender psychology and complex sexual politics – I even learned some hopefully true things about witchcraft. But none of that gets in the way of the fun.