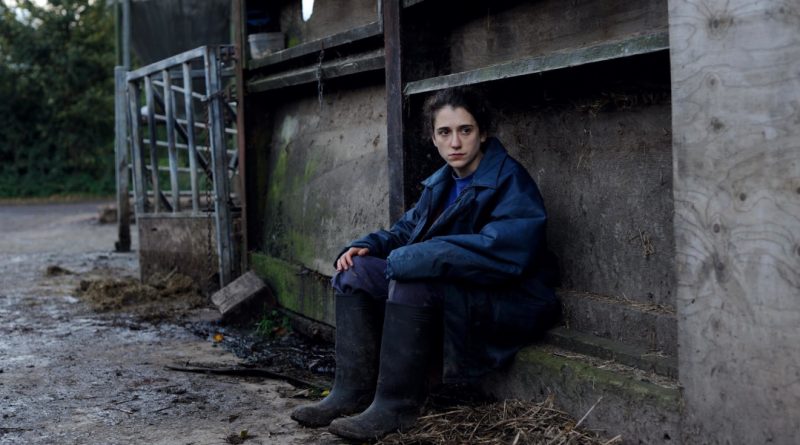 What a super little film this is! Well directed, beautifully filmed and superbly acted, this British film by Hope Dickson Leach is a little gem.

I first saw the actress Ellie Kendrick as a very young Juliet in the Globe Theatre’s production of Romeo and Juliet in 2009. She looked just right as the child heroine but her inexperience as an actor meant that her acting skills were not sufficiently honed to cope with the large space of Shakespeare’s Globe Theatre. Since then she has studied and grown in maturity both as an actress and a woman. In this film she is more than capable of portraying Clover, the veterinary student who comes back to her father’s farm in Somerset for the funeral of her brother.

The levels are the area in Somerset which was so badly flooded in 2014 and because the insurance company has not paid out, Clover’s father, Aubrey (David Troughton) is still living a very squalid life in a caravan on his farm. Aubrey is a widower who refuses to accept that his son, Harry, committed suicide and keeps saying it was an accident with the shotgun. Clover gets many of the details from Harry’s good friend, James (Jack Holden) and she gradually pierces together what happened. Along the way she discovers a few horrors, including finding badgers which have been illegally shot and buried. But she keeps trying to make contact with her father who seems intent on telling her to leave.

The land around while lovely to look at is hard to farm as Clover realises when she puts on wellies and assists with milking and other farm duties. Unusually for a farm girl, Clover is a vegetarian and there is a well-developed scene when she is told to eat just the potato in the shepherd’s pie given by a neighbour and tries to explain that the potato was cooked together with the meat.

David Troughton puts across the character of the bad-tempered father who grumbles at his daughter yet shows us glimpses of fatherly love under the bluster. Ellie Kendrick is an intelligent actor and this shines through her portrayal of someone who left home but can’t bring herself to leave her father all by himself.

In her debut film, Hope Dickson-Leach has written and directed a very special film – in its concentration on characters and connection to the land it reminds me of the work of Kelly Reichardt. There are no big explosions or car chases in this film, but there is plenty of excitement and moments of tension. Emotions run high and are well conveyed by Troughton and Kendrick. I was glad to see the levels starring in a film and urge you to see the film.