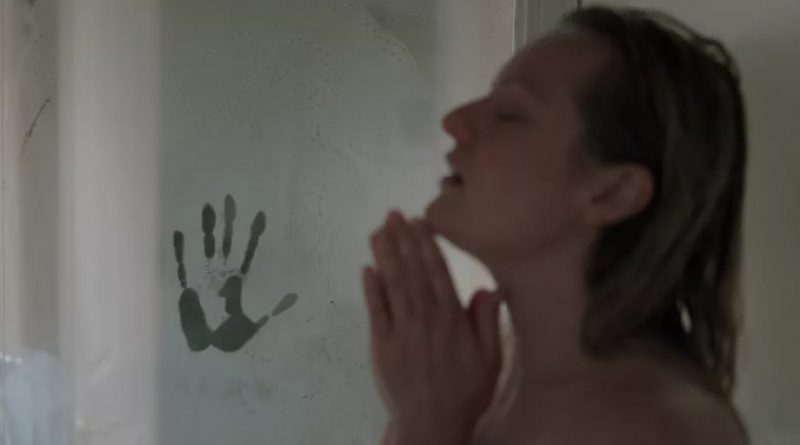 This has little apart from the title to do with H.G. Wells’ story but is a contemporary based horror movie, born of the Universal Studios monster tradition/franchise.

The film opens with Cecilia (Elisabeth Moss) escaping in the middle of the night from an ultra modern house which has the chilly proportions of a warehouse.  She appears to have drugged her husband Adrian (Oliver Jackson-Cohen), whom we later gather is controlling and abusive.  Soon after she has taken refuge with friends, Cecilia hears that Adrian has committed suicide.  However, knowing what a wily blighter he is, she doesn’t believe it and quite right too, as very soon strange things start to happen and she finds she is being pursued and abused by an invisible being.  Adrian is a brilliant scientist in the field of optics – though just how this technology has enabled him to make himself invisible the film rather glosses over.

After her mega stint on The Handmaid’s Tale, Moss is well versed in playing abused women, though her face in repose is actually intimidating enough for her to have a crack at playing a villain herself.  She’s a strong actress, who holds this film together but she often looks too strong to be totally convincing as a helpless victim.

The plot is pretty inventive in terms of creating ways for the Invisible Husband to terrorise her and indeed bump off a few of the other characters and the actors and special effects department create some impressive physical scenes of people being dragged around, beaten up and indeed murdered before our very eyes by an invisible entity.

However the characters, including Cecilia herself, aren’t really all that interesting.  They seem more like horror movie puppets created to illustrate the visual inventiveness of the plot.  There’s also a dog involved who doesn’t seem to know his role in the story, apart from at one point accidentally setting off a burglar alarm.

The film will though pass the time efficiently enough for you horror fans while you wait for another one to come along.