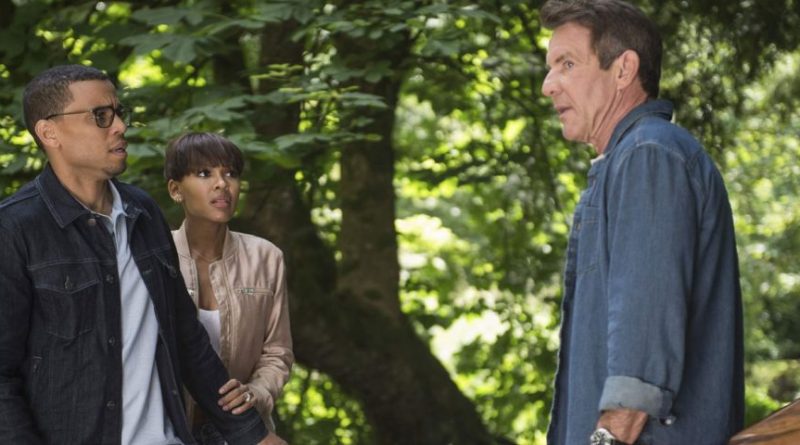 The moral of this tale is be very careful from whom you buy a house!

It’s a somewhat predictable but well made horror thriller about an affluent young upwardly mobile couple Scott (Michael Ealy) and Annie (Meagan Good), who decide, as so many couples in American movies do, to leave the grubby city for the clean joys of the country.   Which of course will conveniently leave the wife vulnerable at home while hubby commutes.  They find their dream home, strike what they think is a good deal with the owner Charlie (Dennis Quaid) but then discover that Charlie is not at all keen on leaving.  In fact they can’t get rid of him.

The problems start when Annie finds Charlie mowing the lawn unasked.  But after that Charlie’s behaviour starts to get a lot creepier.  He just keeps popping up inside the house, even though the locks have been changed – and elderly though he is, he also appears to have designs on Annie.

The film takes a while to get going but once we get into the plot proper, it peps up a lot.  Quaid with his initial country old boy charm hiding something much darker and more ruthless makes a most effectively menacing unwanted visitor.  There’s an interesting conflict between him and Scott over Charlie’s passionate love of the right to bear arms and Scott’s total fear of guns, which involves a lot of macho posturing on both sides and a somewhat morally suspect resolution.

Good as Annie, although largely trapped in the helpless heroine role, brings a lot of likeability to her role and the scenes when she is trapped alone in the house with Charlie are satisfyingly tense.

While not a great example of the genre, this has its fair share of jump out of your seat moments and is worth seeing for Quaid’s performance.

The Intruder is available on DVD and Digital Download