Actor Sam Elliott has been a film actor for decades.  An early role was as the card shark in “Butch Cassidy and the Sundance Kid”.  He got to say the iconic line “The Dude abides” in “The Big Kowalski” and was Cher’s biker boyfriend in “Mask”.

I was rather taken with him as embodying my vision from Philip Pullman’s novels of the Texan aeronaut Lee Scoresby in “The Golden Compass”.

Now aged 72 with his thick white hair and moustache, weathered face and deep bass Southern drawl he is still handsome and yes, sexy, as he demonstrated as Blythe Danner’s later life lover in “I’ll See You In My Dreams” just a couple of years ago.   But his role in “The Hero”, written and directed by “Dreams” director Haley, is the first time he has played an actual leading role.   And he rises to the occasion brilliantly.

Elliott plays Lee Hayden, a veteran star of Westerns, whose glory days are well behind him.  The title of the film refers to the only role Lee is proud of in a career which is now reduced to voicing commercials for barbeque sauce in a voice which puts Colonel Sanders to shame.  He only appears to have one friend, Jeremy (Offerman), who was his co-star in a TV Western series years ago and who keeps Lee well supplied with dope.  Then Lee discovers he has terminal cancer, and the contemplation of his own death causes him to put his life in order and to make somewhat ineffectual efforts to reconcile with his daughter Lucy (Ritter) via his ex-wife Val, with whom he still has a cordial relationship and is played by Elliot’s real life wife Katherine Ross in two small but effective scenes. And he finds himself drawn into a May and December love affair with a stand up comedienne Charlotte (Laura Prepon), who quotes the poetry of Edna St. Vincent Millay at him and is not much older than his daughter.

The story is well told and neatly plotted – perhaps over neatly for some, who may accuse it of relying on too many cliché situations.   But Elliott, well supported by his fellow actors, brings such presence, sincerity and at times a dry and laconic sense of humour to the role that you cannot help but be caught up in him and his world.  His reaction to being invited to accept a lifetime achievement award from the ageing fans who make up the Western Appreciation and Preservation Guild is a gem, as is the humility of his acceptance speech, which makes him for a brief moment into a social media star.

One gets the feeling that director Haley, who wrote the film specifically for Elliott, was determined that the world would finally get to see what this actor could do.  And his veteran protégé doesn’t disappoint.   He is totally charismatic, demonstrating that this opportunity to carry a movie – he is rarely off camera – is well overdue.  He now has three more films currently in the pipeline, including the intriguing sounding “The Man Who Killed Hitler and then The Bigfoot”, in which he co-stars with Aidan Turner”

For some reason “The Hero” however failed to secure a UK theatrical release.   It is well worth taking this first opportunity to see it on DVD. 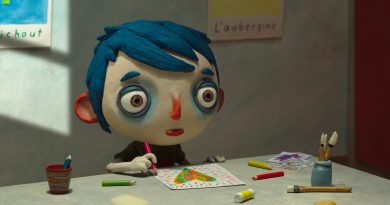 My Life As A Courgette (PG)| Close-Up Film Review