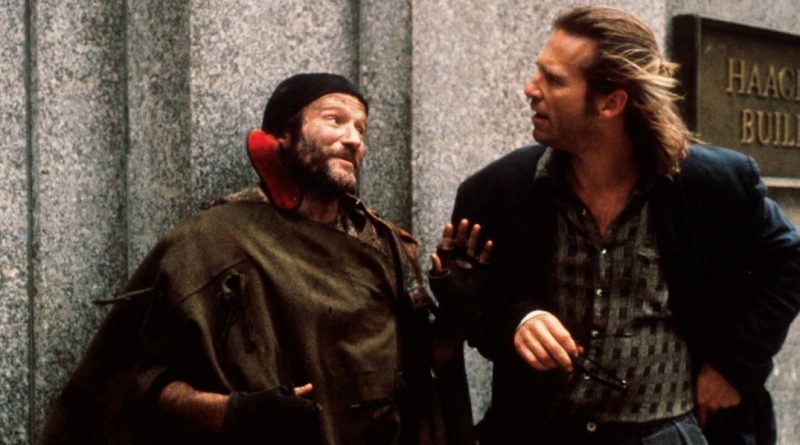 This carnivalesque love story, conquering the nihilism of 1980s New York through the lenses of a former radio show DJ and a PTSD-suffering homeless man comes to Blu-ray.

Bridges plays Jack, the mean-mouthed phone-in host who falls into despair when the advice he gives to a caller has devastating consequences. In Gilliam’s classic he must go on a journey to discover himself again and what is important in his life. He meets Williams who is Parry, an unhinged bum that takes Jack under his dirty wing as a strange but beautiful symbiotic relationship forms between the unlikely pair.

The restoration of the format is brilliantly sharp and possibly even heightens some of the absurdist effects in the film.

It is also a delight to see Robin Williams during one of the most productive and electric periods of his career. It’s a story which allows his vast range to shine. Madness, strangeness, silliness and earnestness all combine in his complex character. There’s an interview with him about his role in the film dubbed ‘Robin’s Tale’ – as many of the extras or ‘supplements’ are named – in which he describes many of the quirks of filming in New York. His observations of the homeless people the team would employ as impromptu extras in scenes are very funny, as is the ‘naked in Central Park’ story and the sweetness of recalling his strongest memory in Grand Central station.

The Fisher King seems vastly underrated. It works as a straight drama with a compelling point-to-point narrative but also contains medieval-style quests, honour and brave deeds which twist these allegorical strands inside a mostly familiar modern setting. There is a lot of detail available in the extras too about the mythology contained in Gilliam’s vision and how it became what it is from Richard LaGravenese’s initial drafts of the script.

The Fisher King is available to buy on Blu-ray from 19th June 2017 via The Criterion Collection UK.