Nadine (Steinfeld) is a dysfunctional teenager.   Her father, who adored her, is dead and her mother Mona (Sedgwick) is left alone to raise Nadine and her elder brother Darian (Blake Jenner).  The only bright light in Nadine’s life, as she sees it, is her best friend Krista (Richardson), to whom she’s been close from childhood.   But when Krista starts dating Darian, Krista feels even more left out in the cold by a world where everyone, as she sees it, is having a better time than she is, and her problems escalate.

Under 30s may well identify with Nadine but anyone older may find her a bit of a self centred pain.  We all know the teen years are a difficult time but apart from Holden Caulfield of Catcher in the Rye fame, teenage angst is something one tends to lose interest in as adult.  Director/writer/co-producer Fremon Craig, making her first film, is though still young enough to identify with the teenage angst of her central character.

You may remember Steinfeld, from “The Homesman”.  She’s a talented young actress and very attractive, but the character she is playing isn’t engaging enough to win our empathy. You really do wonder what she has to be dysfunctional about.  A lot of the time she comes over as just a spoiled brat.  All the focus is on Nadine and not enough on her interaction with the other characters, who are all potentially more interesting than she is.

For example Harrelson as her teacher – his dry approach to this problem child in their scenes together is really amusing but we could have done with more of that relationship.  Both Sedgwick and Jenner have rather underwritten roles and it’s a shame that Richardsonas Krista drops virtually out of sight once she starts going out with Darian.  A stronger emphasis on Nadine’s relationships with these characters, as opposed to keeping the spotlight on her all the time, could have thrown more light on Nadine herself.

One of the most engaging characters is Hayden Szeto as Erwin, Nadine’s geeky Korean/American classmate who turns out to have surprising depths. The film has some Korean production input, which is possibly one reason why the character is there but he is well worth his place in the story.  Szeto really captures our attention and as a bonus the animated film his character makes as a school project is terrific fun.

To be fair to the film Nadine does start to generate more empathy towards the end, when she has a disastrous date with the boy she has a crush on, after which she starts to pay a bit more attention to other people rather than herself.   And maybe that’s the moral of the story, that you don’t become a proper person until you stop focussing on yourself and start caring about others.   But my goodness, it’s a painful journey for Nadine and the audience, while she is getting there. 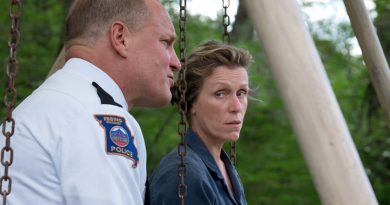