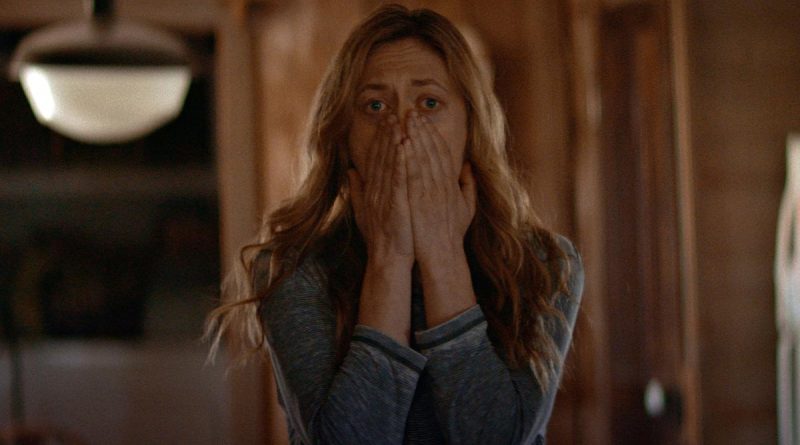 An intriguing, tense but unfulfilling horror film from the writer-director of the much-admired The Strangers.

Siblings Louise (Ireland) and Michael (Abbott) return to their family farm to help their mum (Oliver-Touchstone) as their bed-ridden father (Zagst) enters his last days.

Mum warns them off staying. She’s convinced there’s an evil presence in the house, waiting to pounce on dad’s departing soul.

Louise and Michael try to help but get strung out on their own fears and sense of guilt.

Bertino knows what he is doing, both technically and in terms of horror film tropes.

Technically, as in The Strangers, he uses the widescreen format to normalize environments before introducing an element of fear with shadows or sounds.

The Dark and the Wicked can be seen as an answer to the question posed by horror’s recent wallow in issues of grief, illness, dementia and senior care.

The question is: how do you – dare to – mix thrills n spills with the grim realities of sickness, death and the obligations of care (given that care is how most younger family members show love for the older generation).

Bertino’s answer here is to focus on the psychological aspects rather than any grand guignol gore deployments. I ended up feeling a bit exasperated by all the outbursts of grief and fear but they will make it all real for some people, I’m sure.

I even got a bit tired of all the itsy-bitsy intimations of evil, the tinkling rope barrier in the barn, the series of creepy strangers who turn up at the farm. None of these “cash out” in any usual genre way. Again, some will like that, some won’t. The lack of any back story to events is certainly refreshing.

When gore does arrive, it seems either unremarkable because it is so well contextualised, or to have walked in from another movie.

As a whole, the film left me feeling unfulfilled because of the way Bertino tells his story. And I can’t really tell whether that sense of unfulfillment is a new nuance for horror cinema or intentional narrative sabotage on Bertino’s part.

I assume that Bertino is intentionally edging the viewer away from their expectations: the final reveal is not a resolution in any normal cinematic sense but more an underlining of the fundamental nature of inter-generational family love in the face of the evil that destroys them.

Apparently filmed in Bertino’s own family’s farm – which adds another creepy element to the film – this is well worth a watch. It is the first physical release of a series on films that have done well online on Shudder channel.