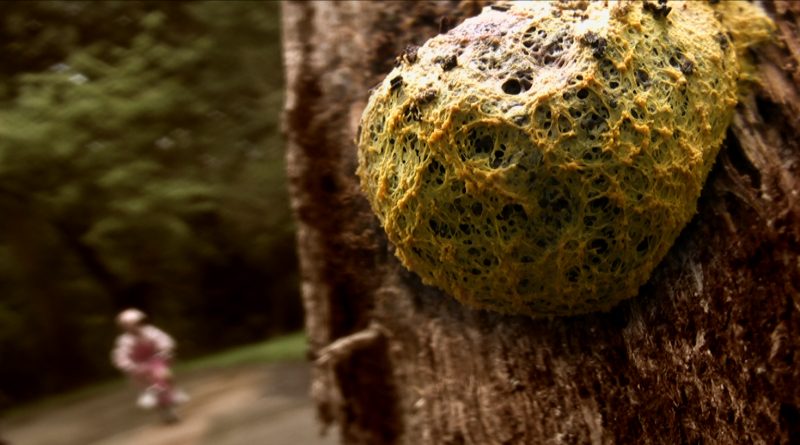 This mildly intriguing documentary explores the little-known world of plasmodial slime mould (PSM), which is basically fungus that moves, and can be seen everywhere there’s dead trees.

The Creeping Garden starts with a real-life news story from 1973 that borders on ‘Oh my God, It’s the Blob!!’ hysteria; but after that the film is a model of decorum, even when examining the work of fringe scientists. And this despite the use of lots of time-lapse photography to make the pulsing growths of PSM look very disturbing indeed.

It’s the behaviour of PSM that excites the scientists, mycologists, artists and musicians interviewed here. All of the interviewees, with the exception of Mark, a keen amateur who likes to roam the woods, turning over mouldy logs, are concerned with modelling the behaviour of PSM; the hardcore ones are using their models to help create ‘bio-algorithms’ that will have applications in their specialist fields, such as robot engineering and musical composition.

The time-lapse photography is wonderful and so is the brief history of time-lapse photography pioneers (all of them amateurs). I was more interested in the scientific than the artistic approaches to PSM but only because I thought the film concentrated for too long on Heather Barnett’s rather literal Rotterdam project.

Even the scientific projects are slightly undercut by the recognition that the relation between bio-algorithm and PSM is metaphorical and analogical – that PSM is an ‘inspiration’ rather than a direct model for scientific innovation. The underwhelming feeling the film leaves you with is due to this: that PSM is just another example of emergent properties in nature, another example of something that is already theoretically well developed. Perhaps that is why PSM has been overlooked by biologists for so long.