In a role not dissimilar in some ways to the late Richard Johnson’s in last year’s “Radiator”, Brian Cox plays a once powerful man laid low by age and illness. In this case though the character is a famous Shakespearean actor, Sir Michael Gifford, now living away from the spotlight on his country estate, where he is suffering from a form of Parkinson’s, which has made him increasingly helpless and cantankerous.  His bossy and protective daughter Sophia (Fox) insists against his will on hiring a carer, a Hungarian immigrant Dorottya (Coco Konig), who keeps quiet about her own acting aspirations.  No prizes for guessing that a friendship is going to develop between these two.  In fact the plot of the film is pretty predictable and reminiscent of a number of other recent films about ageing such as “Quartet” or the Marigold Hotel movies.  What makes it eminently watchable however are the characterisations, the humour with which the story is handled and the director’s obvious love for his characters.

Not that Gifford is immediately loveable.  He is in fact something of a monster, railing against the “dying of the light” and the humiliations of his condition, such as incontinence, in what are often quite Shakespearean rants.  Gifford’s body may be frail but his tongue is not.  The role is a bit of an older actor’s dream and Cox, now 70 years old and still at the height of his powers, seizes all the opportunities it offers.  Konig is both sweet and strong as Dorottya and they make a good double act.

The supporting roles are also strongly played –  Fox as Sophia, a bit of a chip off her father’s block, Chancellor as Gifford’s housekeeper and one time mistress and Karl Johnson as Gifford’s loyal former dresser, now chauffeur and gardener.   Hungarian director Edelényi gives the film some interesting detail, scattering around Gifford’s home photographs of actor Cox’s stage successes and seizing the opportunity through Dorottya to reference the West’s dismissive attitude to Hungarian culture. The film also makes liberal use of references to Shakespeare, most particularly “Hamlet” and “King Lear”, with mixed success.  Mostly they work well to illuminate the character, though a scene where Gifford and Dorottya play the Lear and Cordelia reconciliation scene to an audience in a retirement home is perhaps a touch of sentiment too far.  Overall though the film’s mixture of sentiment and humour works well.

The climax of the story is a critics’ awards ceremony where Gifford is hoping to give the final performance of his career.  While the event itself is not totally convincing (I’ve been to many such!), the vigour of the actor’s speech, partly written by Cox himself, in which he accepts the inevitability of age along with his lifetime achievement award, is impressive.   When the question is “To be or not to be”, the answer has to be “To be” – to live life to the limit of your powers until your dying breath. 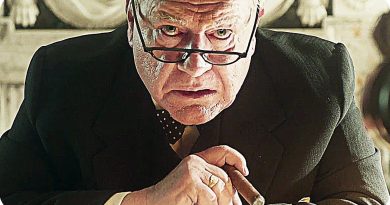