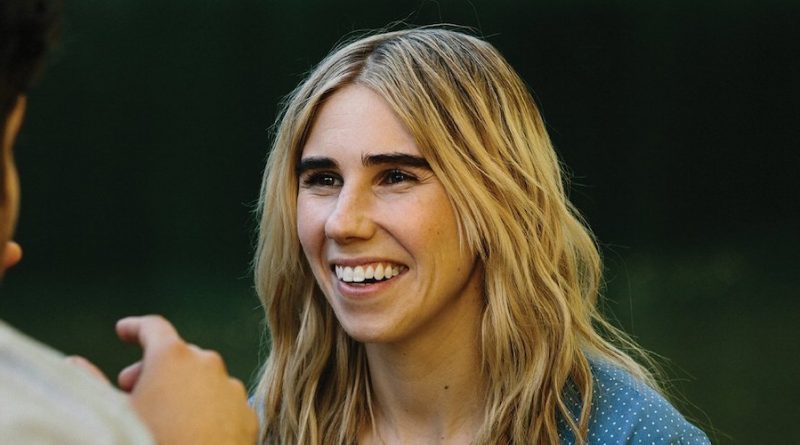 This is a promising idea for a romantic comedy from first time feature film director Sophie Brooks, but Brooks, who also wrote the script, hasn’t quite cracked it yet, in that it is not very romantic and rarely funny.

Diana (Zosia Mamet) returns to New York after spending a few years living abroad and moves into a new apartment in a lovely brownstone building with all its original features.  She then discovers that living in the apartment downstairs is her ex boyfriend Ben (Matthew Shear), whom she dumped in order to set off on her travels and who now has a new girlfriend.  Their encounters are awkward as they try to move into a sort of friendship.   But is Diana really over him and if not, what chance is there that they will get back together again?

One of the problems with the film is the timeline in that the narrative moves constantly from present to past and back again.  There is the occasional helpful subtitle for flashbacks – “four years earlier” – near the beginning of the film but after that you’re on your own sorting out which is past and which is present.   For scenes in the present Ben is now wearing glasses but because he looks so very different in the scenes of the couple’s past romance, there are times when it’s not clear in the narrative at first whether we are tracing Diana and Ben’s earlier relationship or whether she’s taken up in the present with a fella who looks rather like her ex only a bit nerdier.

Another problem is Mamet as Diana.  She has a following in the US certainly from the comedy drama “Girls”, which got an outing here a few years ago on the Sky Atlantic channel.  She’s not conventionally pretty, as romcom stars tend to be, which is a big plus.   She looks like a real person.  But as an actress she lacks the light touch and charm needed for romantic comedy.  Her best comedy moments come from scenes of her with her clients in the bridal shop where she works.  Not, I would have thought, a well paid job, so how does she afford that lovely apartment?   She is though effectively touching in the more serious moments when Diana is love-lorn and sad.  The character is also a wannabe writer, though what we see of her creative work is not impressive.  Overall she is difficult to like or empathise with.  Shear as Ben is likeable and attractive enough but the sexual chemistry between them is pretty much zero – something which is not helped by scenes of their past romance, when they go to bed together swathed in cardigans and sweat pants as though they were bedding down in the Arctic.   Not very sexy.

The most interesting relationship in the film is that between Diana and her widowed landlady Amy (Deidre O’Connell), who has a love story of her own to tell, which is far more interesting.   We could have done with more of her.