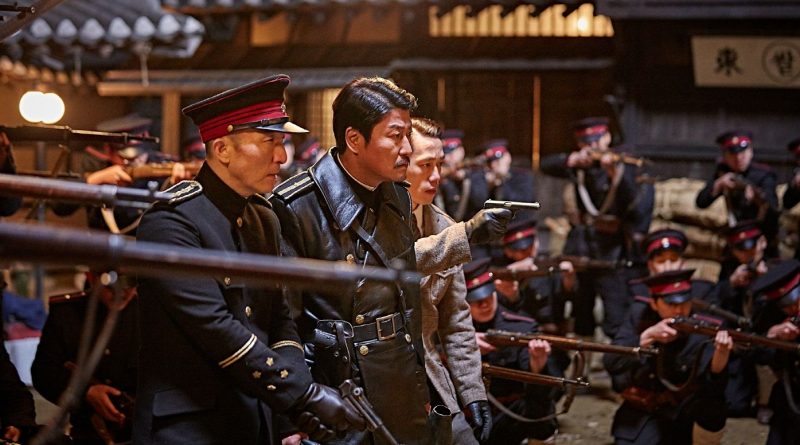 This story is set in an era of Korea’s history with which not a lot of people in the West are perhaps familiar.  Korea was under Japanese occupation from 1910 to the end of World War II in 1945.  The inspiration for the film was a true life incident in 1923, when the police headquarters in Seoul was bombed by a member of the Korean resistance.

The central character In south Korean director Kim Jee-woon’s film version is Lee Junng Chool (Kang-ho Song), a Korean police inspector in the Japanese police force, who is instructed by his masters to infiltrate the resistance movement, who are fighting for Korean independence.  He tracks down one of their leading lights, Kim Woo-jin (Yoo Gong) and gains his confidence up to a point.  Both men though are wary of each other and the situation is not helped by the presence of Lee Junng Chool’s Japanese “watchdog” Hashimoto (Um Tae-goo).  The story then takes us to Shanghai, where the resistance is planning to obtain explosives, which they intend to smuggle into Seoul for the bombing.   But someone is leaking information on both sides and no-one knows who is responsible.  Most intriguing of all, which side is Lee Junng Chool really on?  Is he the hero of the story or is he the villain and a collaborating traitor to his country?

Because of our lack of knowledge of the historical background the details of the plot are sometimes tricky to follow, not helped by the unfamiliar names. In an English speaking  film if someone refers to a character called say Fred or John, whom we’ve seen earlier, we’re going to remember the face.  Not so easy with the Korean naming system.  However after a while the important elements of the plot do become clear.

Korean films and indeed this particular director have a reputation for being somewhat explicit when it comes to violence and there are some strong scenes, particularly those involving the torture of the only significant female character, resistance member Gye-soon (Han Ji-Min) – though these are no more explicit than the notorious ear chopping in “Reservoir Dogs”.  In both cases it is your imagination that does the work.

The violence throughout is by no means excessive by today’s standards but the film is most notable for its really well staged action scenes, starting with the opening sequence. where it appears the whole of the Seoul police force is involved in the attempted capture of one man.  Particularly gripping though is the long, skilfully developed and increasingly tense sequence on the train from Shanghai to Seoul, onto which members of the resistance all in different disguises have smuggled the explosives in their luggage.  The tension builds and builds until it finally explodes into violence.

The period setting of the Far East in the twenties is also convincingly recreated – the cars, the clothes and the exotically different atmosphere that Western travellers of the time reported on returning from their travels.   The train in particular is a production designer’s work of art – a thing of beauty to rival the Orient Express.

All in all a good well paced thriller which also fills us in on a bit of history we probably didn’t know about before.