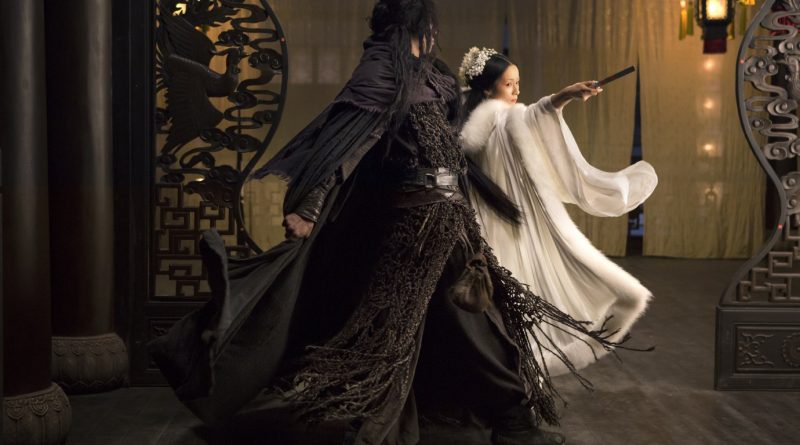 A great story is mistreated by terrible CGI is this retro remake of a Shaw Brothers classic. But the retro elements are a lot of fun.

The excellently monikered ‘Useless Chi’ (Kenny Lin) is an affectless loner working as the oddjob man in a brothel.

Yen (Peter Ho) is an alcoholic, death-obsessed swordsman who sleeps in a coffin and has a skull tattooed on his face. He kills almost everyone he meets in an attempt to reach his goal, a sword fight with the even more legendary Sword Master, aka The Third Master of Supreme Sword Manor at Green Lake under Jade Peak!

When Yen is hired by Princess Li (Mengjie Jiang) to kill the fiance who jilted her not once but twice, he embarks on a war against the four clans that rule China.

Can a film look this bad and still be good? In the old days of wuxia and martial arts films we had dubbing and subtitles to make us laugh. Sword Master is proof that cheap / lazy CGI has taken their place in dragging films down to the post-pub experiential level. Except perhaps lazy CGI isn’t funny in the same way – it just debases the currency of film narrative.

The underdeveloped CGI backgrounds – especially in landscape shots – sour what would otherwise be a magnificent film, but Sword Master is still a big load of fun. The story has just the right amount of complexity, twists and turns. If the central characters are either too stolid or too over the top, lots of the supporting characters from the ‘peasant’ class are very engaging, such as the optimistic night soil man, his lively mum and the mournful prostitute Mu-Yung (Yiyan Jiang).

If Yen is a bit too gothy – The Crow meets Ledger’s The Joker – Chi is a hero of Tolstoyan worthiness and dullness, appropriate in a film which apes concern at the way the powerful treat the poor.

Best of all are the fight sequences, shot in classic Shaw Brothers style with loads of establishing shots and figures fully in the frame – so that you can see how their whole bodies are moving. None of that choppy modern editing, thank you.

Okay, so Sword Master was originally in 3D that looks to have been as awful as the CGI and so this is a real missed opportunity of a remake twice over. With big names like Tsui Hark and Derek Yee attached, Sword Master should have been fantastic. But it is still good fun and well worth checking out – it may come to be an exemplar of the ‘so bad it’s good’ cult film in the CGI age.

Sword Master is out on DVD, Blu-ray and digital download on 10 April 2017.