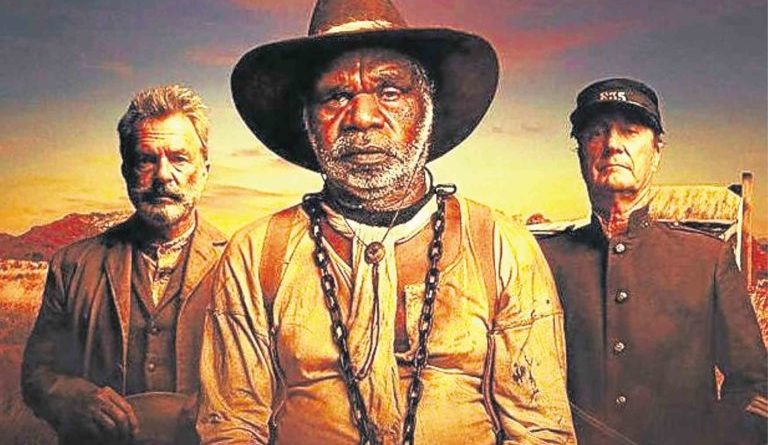 This film is set in 1929 in the remote Alice Springs area of central Australia, where Thornton grew up – an area made famous by writer Neville Shute’s novel and the later film, “A Town Like Alice”. Inspired by an actual event in the twenties, it tells of an aboriginal stockman, Sam Kelly (Hamilton Morris), who shoots a white man Harry March (Ewen Leslie) in self defence, when March lays siege to his home.   Realising he has little hope of a fair trial, Sam and his pregnant wife Lizzie (Natassia Gorey-Furber) go on the run into the outback.  They are pursued by a posse, led by the local lawman Sergeant Fletcher (Bryan Brown), who is determined to see a man, who in his eyes is a murderer, brought to justice.

Using the genre tradition of the Western, this is an engrossing and emotionally gripping story, beautifully acted by a cast of both experienced professional actors and first time local actors from Alice Springs.   As well as Morris and Gorey-Furber, the inexperienced players giving professional level performances include Tremayne Doolan as Philomac, the runaway boy, whom Sam is attempting to protect from the enraged Harry, when the shooting occurs, while veteran actor Sam Neill puts in a brief appearance as one of the few fully sympathetic white characters in the story.

There is a lot of silence in the film.   Not just the culturally traditional silent communication between the indigenous Australian characters but the taciturnity of the white ones too, as in Fletcher’s relationship with his girlfriend, who runs the local bar.  Scarcely a word is exchanged between them.

As in many Australian films, the landscape itself is one of the stars.   Beautifully shot by the director himself, who acted as his own cinematographer. it is awe inspiring and even terrifying in its vastness and beauty.  In one memorable shot, Fletcher, now isolated from his companions, is lost and nearly dying in the desert.   We see his solitary figure, alien to the landscape. stumbling further and further from us in what is almost a reverse of the famous shot from “Lawrence of Arabia” when Omar Sharif appears out of the desert.

Hunt for the Wilderpeople (12A) | Close-Up Film Review