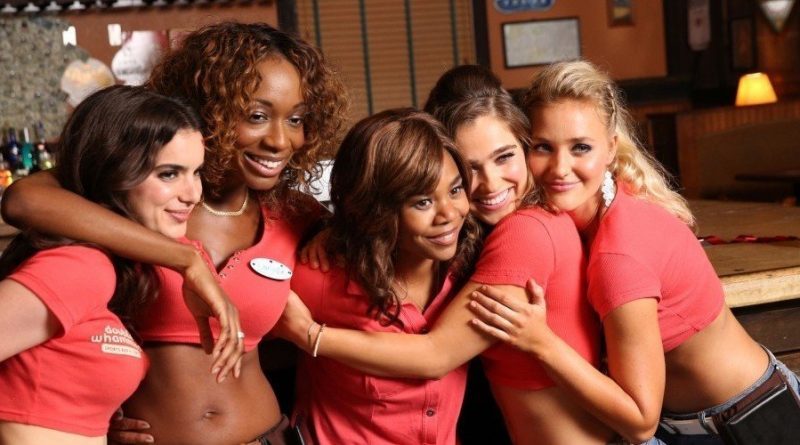 Support the Girls in line with its title has a female solidarity theme.

Lisa (Regina Hall) is general manager of Double Whammies – name says it all – which is a roadside “sports bar with curves” in Texas.  She likes to describe her team of all girl waitresses as “family – in a family bar only with less clothes”. Though she’s rather kidding herself when it comes to the “family bar” part, as its clientele consists almost entirely of blue collar males leering at the staff.   Which is not surprising, as the “less clothes” is a uniform of tiny shorts just about covering the girls’ bottoms and tiny tops in a rather fetching shade of coral pink exposing a lot of bosom and midriff.   Low rent Playboy really.   In her role as a sort of “bunny mother”, Regina is allowed to wear a more body covering tee shirt, though in the same fetching shade of coral.

The film follows the team through the course of one day.  The women’s loyalty to Lisa, who defends them doggedly against the drudgery and humiliation of the job, is clear.  “You like working here? You can be honest, think about it,” she says at one point to single mother Jennelle (Dylan Gelula), who has no choice.   “I like working with you”, is the reply.

Hall the actress and Lisa the character are total stars.  Lisa knows the job is sexist rubbish and her patience is wearing thin but even when it drives her nearly to tears, she always puts on a cheerful face for the sake of her team, whom she will defend to the bitter end.  In the course of the day she trains a new waitress, tries to get the repair man in to fix the tv before the evening’s big game, warns her bubbly number two Maci (Haley Lu Richardson) to steer clear of one particularly gropey customer, keeps the bar’s owner Cubby (James Le Gros) in order and generally struggles to keep the ship afloat and herself and her girls employed.  While also coping with her depressive ex partner Cameron (Lawrence Varnardo), who refuses to quit the scene.

The film is effectively a tribute to the exploited working class women of this particular milieu and the casual sexual harassment and racism they have to put up with for a pitiful wage and the hope of tips.   There is a lot of incident as the film builds a picture of these women’s lives, though not much of a story as such.  It is also very American and the alien culture combined with the strong Texan accents, which at times make some of the women sound like demented ducks, may make it a bit tricky for UK audiences to identify with.

There is though a universality about these women, with which the #MeToo movement in particular will identify.  And the energy of Regina Hall’s performance more than carries the film.

On DVD and Digital HD on 21 October 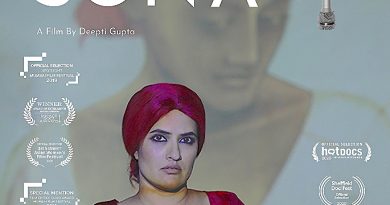 Free screening of music doc ‘Shut Up Sona’ plus Q&A