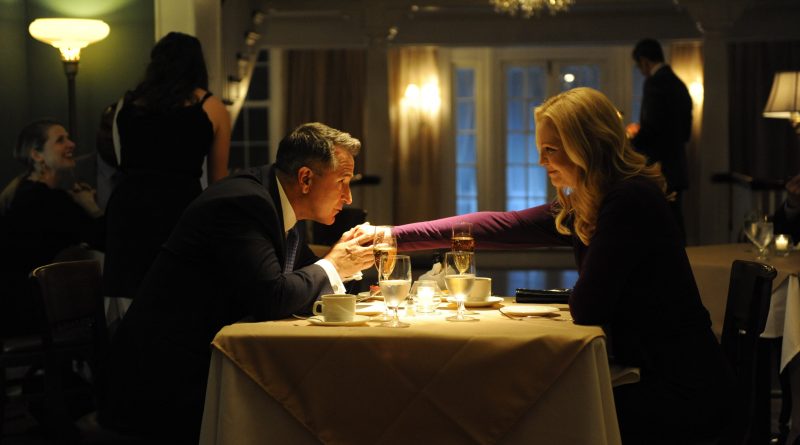 Whilst his stories are consistently good, the same cannot be said of many of the film adaptations of his work.  King himself is very open about his dislike for most of them.  He famously hated Kubrick’s adaptation of The Shining, so much so, that in 1997 he produced his own version for TV.  Although there are exceptions.  After he first saw Stand By Me, he was said to be visibly moved.  Whilst the author is often credited as a Producer on many TV series based on his works (such as the hugely popular Under the Dome), he’s gone a step further this time and has actually written the screenplay for this adaptation (his first screenplay since the 1992 film Sleepwalkers and his first adaptation of his own work since Pet Semetary) of his short story, which featured in the collection Full Dark, No Stars in 2010.

The film focuses on Darcy and Bob Anderson, who we meet as they celebrate their Silver Wedding Anniversary.  Darcy is an easy-going, nurturing wife and mother.  Bob is a successful businessman who is good fun to be around and an avid coin collector.  When Bob heads off to a coin collecting fair, Darcy uncovers a terrible secret that her husband has been hiding from her.  Reeling from her shock discovery, Darcy struggles with a moral dilemma.  Should she give up the life she has created for herself and her family, or protect the man she’s been married to for 25 years?

A Good Marriage (despite a fine supporting cast) is a definite two-hander.  Joan Allen, who is perhaps best known for hard-faced women of authority roles in the Bourne films and the Death Race remake, is excellent as a timid housewife with a penchant for candies.  She sparks off of LaPaglia’s Bob to great effect and the two go through a very good arc together.

The film, which takes place in Maine (as any good King story should) is well shot and provides enough intrigue to see the story through to its conclusion.  It did sag a little in the middle for me, as Darcy struggled with her conscience but thankfully, it moved past that and the end result was an intriguing character study which King, director Peter Askin and the cast should be proud of.

A Good Marriage is an interesting project.  Taken at face value, it’s a morality tale about the secrets we keep from our loved ones, however some viewers will no doubt enjoy it’s black comedy elements and have fun with it.  It’s not in the same league as Frank Darabont’s The Shawshank Redemption or The Mist and it’s not as terrible as Tobe Hooper’s The Mangler.  Instead it sits nicely in the middle, ready to be enjoyed by viewers who have matured with King’s works and can enjoy a classy affair just as much as a big budget blockbuster or a silly B-movie.

A Good Marriage is available on DVD from 20 April.