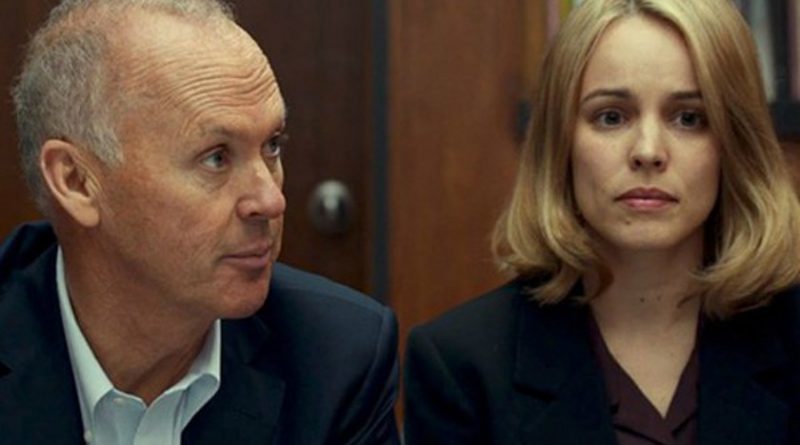 The subject sounds distasteful but the film is actually a true and well-made account of the sexual abuse of children by Catholic priests in Boston, brought to light in 2002 by a remarkable team of investigators working for ‘Spotlight’ at the Boston Globe. The disclosure didn’t just shock Boston but had a wider impact on the whole of America and indeed on the rest of the world.

It all starts when a new editor Marty Baron (Liev Schreiber) takes over at the Boston Globe in 2001.  He identifies the story of a local priest abusing a large number of young children over his 30 years in working in the Church and he wants the Spotlight team to investigate. This means a major job of taking on the Catholic Church in Boston.  At first some of the team, including the Spotlight editor Walter “Robby” Robinson (Michael Keaton) is concerned at the huge task and the effect it will have on their largely Catholic readership, but he and his team of reporters Sacha Pfeiffer (Rachel McAdams), Michael Rezendes (Mark Ruffalo) and researcher Matt Carroll (Brian d’Arcy James) approach the job professionally and spend all their time looking first at one case and then at many more as the scale of the paedophilia is discovered. They are backed up by the Globe’s Deputy Editor Ben Bradlee Jr. (John Slattery)

They speak to the attorney of the victims, Mitchell Garabedian (Stanley Tucci), interview adult victims who were assaulted as youngsters and hear their very sad stories.  There is an exciting sequence when Mike Resenedes rushes around to get the court records – which have been removed by the Catholic Church – released to the public.  As the team pore over the documents, it becomes obvious that the scale of the abuse is much more extensive than was first suspected. The team support the Editor’s view that “We’re going after the system.”

Obviously the Church officials, under Cardinal Bernard Law, the Archbishop of Boston (Len Cariou), are very much against the exposure, which the Spotlight team learn has been known about for decades. After publication of the true facts, Cardinal Law was forced to apologise and he resigned from his post in December 2002. He was, however, re-assigned by Pope John Paul II to the Basilica di Santa Maria Maggiore in Rome where he still serves!

The Boston Globe published the full article on 6 January 2002. By this time the team had confirmed that more than 70 local priests in Boston, who the Church had assigned to other parishes.  They paid money to the families of the child victims to keep the cases confidential.  Most of the youngsters targeted were from broken homes or those without fathers present. The resulting furore led to revelations in more than 200 cities throughout the world.  In 2002, the Spotlight team published nearly 600 stories about sex abuse by more than 70 priests whose actions had been kept secret or covered up by the Catholic Church.  At the end we learn that 249 priests have been publicly accused of sexual abuse within the Boston Archdiocese, and, by 2008, 1,476 victims survived priest abuse in the Boston area.

The fact the film is so engrossing and runs at times, like a thriller, is due in no small way to the skill of director Tom McCarthy. He controls the action so that film speeds along and he uses his actors to get the best performances possible.  The underplaying of the Editor is done so well by Liev Schreiber that one can almost miss the subtlety he employs to enthuse his reporters.  Rachel McAdams puts in a performance of great honesty as she listens carefully and sympathetically to the victims’ accounts of their suffering.  Mark Ruffalo is most impressive too, as he rushes around in a most energetic manner pursuing each lead.  While Stanley Tucci has a smaller part, he manages to produce a character that shows just what he has been through and how he now wants to help the journalists.

For most of you reading this, the story is no surprise as we all became aware of what was happening as a result of the Spotlight Team’s work. How the film manages to put across the manner of the investigation in such a thrilling manner is not known to most of us. As a result of this film we can learn the full extent of the investigation into these terrible crimes against small children.