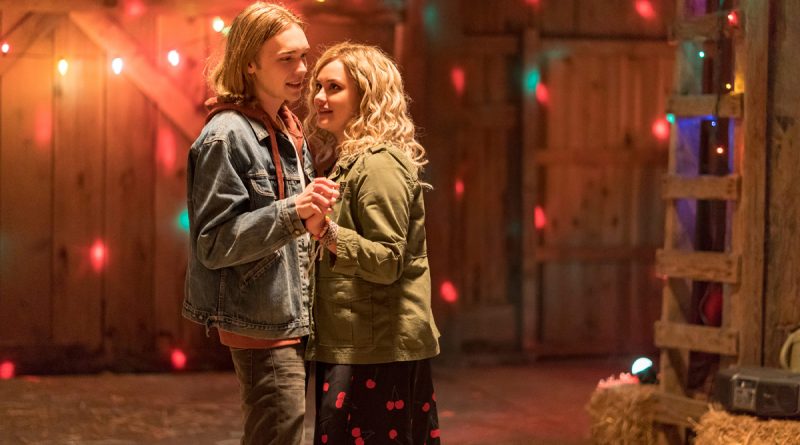 Over the years there have been countless teen horror movies, but nothing as strange and unusual as Spontaneous. It’s got comedy, it’s got romance and it’s got gore!

It starts in a High School classroom. All appears normal at first, the teacher is talking, the students semi listening and the next minute ‘pop’, a student explodes (literally). Clothes remain untouched, no bang, no desks go flying like in a bomb has gone off and there are no flames of human combustion; nothing but a simple ‘pop’ like a balloon. Classmates run away and everyone is confused. Mara (Langford) had bent to pick up her pencil and when she rises from her desk, she is shocked, but curious at the same time. There is one question on everyone’s lips – is this a one off case of the human balloon, or will it happen again and if so, who is next?

This bloody explosion brings together High School seniors and outsiders Mara and Dylan (Plummer) who become closer, talking about living each day as if it may be their last. When a footballer unexplainably and spontaneously ‘pops’ during a football game, things start to hit home and the students realize this could and very likely will happen again. But who to?

This is Brian Duffield’s directorial debut and although Spontaneous leaves you wanting to live each day to its fullest, never knowing what tomorrow holds, it does slide around a topic matter that hits home to many of us at the moment; a sickness that appears to have no treatment, just bereavement. The storyline in this case is odd and outrageous yet leaves the viewer curious as to how it will all end for these High School Seniors. The characters are unique with Mara being generally easy going, entertaining, takes life with a pinch of salt, free spirited and Langford plays this with ease.

With regard to the narrative, it’s strange but intriguing. Parts of the story are told from character straight to the camera like when Dylan is telling Mara when he first met her and how this caused him to have feelings for her, which creates a relationship between viewer and character. There are segments of comedy when Mara and Dylan are quarantined by the army in plastic rooms opposite each other and imitate a scene from ET. It is within the last third of the movie however, when things take on a much more serious nature and all that light heartedness is lost with some very serious outcomes. It is here that you gain a sense of just how unique this movie is.