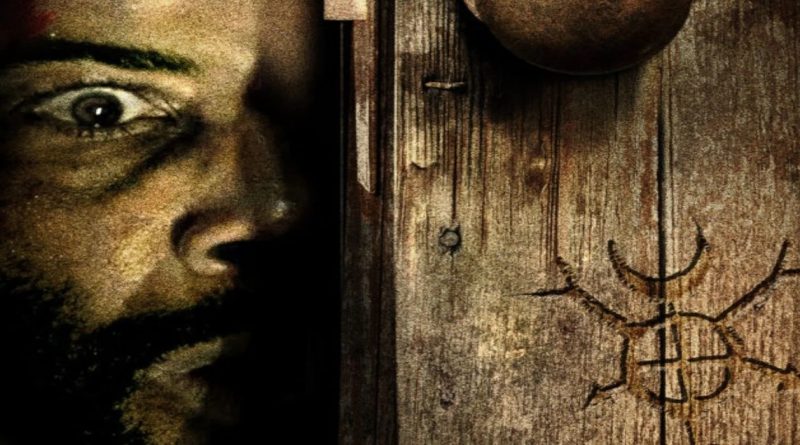 Marquis T. Woods (Hardwick) is a Big City lawyer with all the material trappings but the past he’s long tried to put behind him returns with a vengeance in this slick supernatural thriller from British director, Mark Tonderai.

When Marquis receives news of the death of his abusive father, wife Veora (Burroughs) insists the family show some support and join him in paying their respects, much to the chagrin of their teenage kids who are none too pleased on having to head out to a rural backwoods full of “hillbillies and banjos”, for a monster they’ve never even met.

Piloted by Marquis himself, the family fly out to the Appalachian Mountains, stopping to refuel at a remote garage and general store. The kind of place that has skulls and jars of scorpions on the counter and spells for protection carved into the privy door.

Meanwhile, his son’s busy laughing at the corn-row-haired local boy. “Country-ass n*****” he mutters. Veora, who already thinks her kids are entitled jerks, tells him never to use ‘that’ word. “At one point we were all country-ass”.

It’s a really interesting set-up. Tonderai (who you might remember as the director of the Rosa Parks episode of Dr Who) is pitting a story that both challenges stereotypes and asks some big questions, suggesting an elevated horror along the lines of Get Out. Here, the tension is between the old and the new; rural and city; magic and science; traditional and modern. Yes, it’s about a Black family who’ve lost touch with their roots and all the ethics that come with that, but it’s also a dilemma facing families & communities across the globe, a clever conduit for both objective and subjective observations.

It’s a shame, then, that Tonderai doesn’t follow through with that premise to leave us with a bit more food for thought. Instead, he steers away from Jordan Peele’s modern classic and instead ramps up the scare factor, harvesting one of the great thrillers of the 1990s: Misery.

On leaving the garage, the aircraft hits a storm and the next thing he knows, Marquis is waking up in a rickety old bed in a ramshackle room, injured with a foot pouring blood and none of his family to be seen. Instead, there’s this crazy old Loretta (Devine) who, along with her farmer husband Earl (Beasley) and hulk of a son, are going to make him better. The boogity doll she’s made from his bits of skin and blood and other stuff will see to that. A virtual prisoner, Marquis has to wrestle with his past and beliefs in order to stand any chance of getting away.

The film is beautifully-shot – all dark blues and yellow; it seems to ooze with blood, sweat, pus and other gloopy body parts. It’s so visceral and brutal, bringing us back to basics – none of this neat nicety of modern life. It’s just so raw.

The problem is it’s a film of two halves. Two great halves. Unfortunately, not matching halves. The trajectory is Get Out, Misery and culminates with ‘American Horror Story’. Personally, that sounds like my kind of film and I’m sure it looked good on paper too. Sadly, it doesn’t quite work. Tonderai can’t seem to make his mind up whether it’s a serious take on race and society or a downright horror romp, one which fails to blend the two together, making for a second half that descends into a stylish but run-of-the-mill tale we’ve seen so many times before, leaving so many threads just blowing in the wind.

That said, it’s definitely worth a watch. Just ignore the cerebral red herrings planted at the start and enjoy it for what it ultimately is – a good old-fashioned super spooky hokum pokum scare ride.