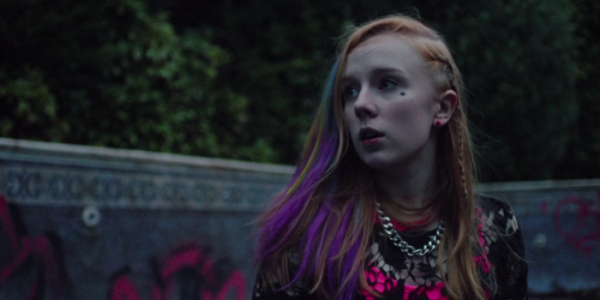 The supposed story of the film concerns Lucidia (Alexa Davies), a teenage girl, whose mother has died mysteriously several years earlier in the family swimming pool and whose archaeologist father Gabriel (Antti Reini) is absorbed in his work and distant from his daughter.

When Lucidia is apparently abducted by aliens (seriously!), Gabriel is forced to interact with his daughter’s friends in an attempt to find out what has happened to her.

Lucidia and her gang are all cypber-goths in dress and way of life, as in all spooky make up, darkly exotic clothes and a vague way of life.  It’s a fashion I associate with art schools in the eighties but apparently it’s back.  The characters are potentially interesting in appearance but the storytelling is frankly baffling and there’s little sense of who they are and what they want.  They include a girl with blue hair and white skin for example, who walks her sort of boyfriend around on a dog lead and Tegan (Lara Peake), who sports heavy eye-make up and is obsessed with unicorns and black holes.  But the narrative is as weak as water.

Very little happens apart from these young people hanging around the streets of Farnham, where the film was largely shot, and a possible alien abduction, whose low tech effects aren’t going to impress the Star Wars generation and which anyway may be a product of Lucidia’s sort of boyfriend’s imagination.  And Gabriel doesn’t really look for his daughter in any serious way.   He just wanders vaguely round the streets with Tegan,  the unicorn girl.   Oh and they all get drugged up at one point and are sick.   The film just meanders along like one long, unstructured improvisation.  The various young goths despite their appearance are not strongly drawn at all.  It is not only tricky to work out who is who – it is not worth the effort.  They don’t even demonstrate a sense of rebellion, just a vague disconnection to life, which fails to engage our attention, unlike the empty swimming pool, which is at least visually interesting.

I was frankly puzzled as to why the film had been made and who director Alex Taylor  thought was going to see it.   She describes her film as being about the young generation, “who have ended up on the outside of life” and it was first screened last year at the London Film Festival to an audience, I’m told, made up of young people similar in appearance to the characters in the film, who appeared to love it.  So there’s my answer.  Financed by public money (Creative England, BBC and BFI lottery fund) it is intended for a niche audience made up of a particular group of the disaffected young.   Perhaps the art school crowd.  Certainly not unemployed youngsters living on decaying housing estates or destitute on the streets, who can’t afford to go to the cinema anyway, nor anyone over the age of 25, unless they’re an ageing hippie, perhaps with a penchant for drug culture!