Ruth and Alex have lived in the same charming and homely Brooklyn apartment for some 40 years.   But now they are older, the fact that their beloved apartment is five floors up is beginning to be an issue.  So they decide to think about relocating – which brings them into the modern world of the New York property market, where things are a lot more ruthless and cutthroat than they were four decades ago and can indeed get quite nasty at times.

The film will ring a lot of bells with Londoners and other areas of the UK where property prices have gone off the charts.   The New York property game however seems different and even trickier to negotiate than the UK one. The film gets some nice comedy out of both the estate agent, desperate to make a sale  (Cynthia Nixon), who chivvies them to seal the deal  with the warning “You snooze or you lose” and the “open house” system, where a load of strangers/possible buyers invade your home making snide comments about the decor – the same strangers, Ruth and Alex discover when they start house hunting themselves, who go to all the open houses just to have a nose round other people’s homes.

Keaton and Freeman are convincing as an affectionate couple with a long joint history.   They are very comfortable together.  Childless, they are devoted to their dog, whose illness in the course of the story adds to their stress.  The apartment, where artist Alex has painted for all those years, is charming with a lovely roof garden – I’m beginning to sound like an estate agent here! – but the film makes its point that where you spend your life is your home, filled with the memories that make that life and not just a piece of real estate and an investment.   As Alex says wryly at one point:  “This room where I painted my life’s work is worth more than the work I created in it.”

We are filled in on the couple’s relationship with flashbacks to when they were young, making their first home together, and the point is made without over emphasis that they married at a time when mixed race marriages were frowned on and indeed illegal in some states, while the stress of contemporary big city life is evoked with a suspected terrorist threat in the background snarling up the traffic.

What the film does lack arguably is any edgy dramatic tension and conflict.  Everything is a bit predictable.  The comedy and the characters are all, even Nixon’s, a bit on the gentle side with no real sense of any serious threat to their way of life.

A potent image for older audiences, who are probably the ones who will most enjoy this, is a visual reference to that classic New York film “Manhattan” of the bench looking towards the Brooklyn Bridge.   Like the film itself, it is evocative of the importance of memories. 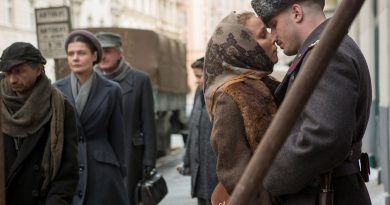