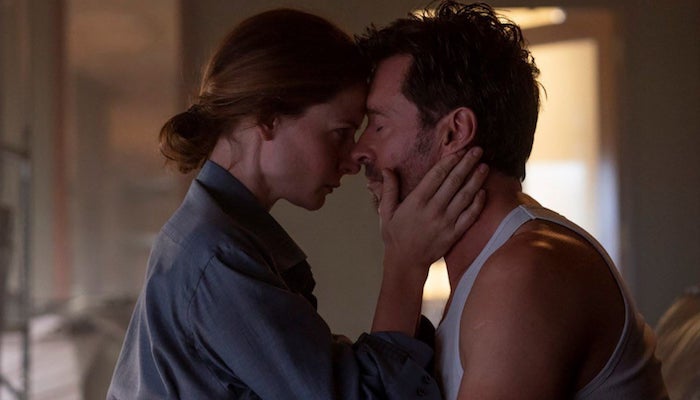 Reminiscence is set in a future world where, after an unspecified war and possible climate crisis, much of the world is flooded – well, certainly Miami and New Orleans.  The rich live on skyscraper islands or raised fortresses and the rest of the population manage as best they can, living a largely nocturnal life as the sun is so hot by day.

One of those people is Nick Bannister (Hugh Jackman), described as a private investigator of the mind.   Along with his assistant Watts (Thandiwe Newton), who is like him a veteran of that unspecified war, he runs a sort of private eye investigation business via a complex piece of equipment, which enables people to relive their memories. While doing so it also records their entire memory bank for later perusal– no data protection in this world it would appear.

In classic private eye mode, one evening a beautiful woman comes into his “office”, requesting his memory service.   Mia (Rebecca Ferguson) is mysterious, sexy and Nick falls for her instantly.  He tracks her down to the bar where she is a singer, they embark on a love affair but then Mia disappears.  And Nick spends the rest of the film trying to find her through her memories, his own of their relationship and those of others in her story, whose minds he is able to plunder.

This is basically the classic “private eye who falls in love with the girl” story with sci fi and action knobs on.   And there is plenty of action – fights, chases and murders most imaginatively conceived, such as an underwater hand to hand struggle to the death involving a grand piano.

Mia’s story takes in some pretty dodgy desperadoes, including an Asian drug lord (Daniel Wu) and an unnamed heavy with some very nasty scars on his head, played by Cliff Curtis.   Despite being supposedly worn out by his war experience, Nick appears to be fighting fit. as is Watts, who is also a mean hand with a gun despite her love of alcohol.  Ferguson for much of the film has little to do but wear a series of very sexy gowns and look enigmatic, though things do hot up for her a bit later on.

This is a first feature film from writer/director Lisa Joy, who has been cutting her teeth as co-creator and producer of television’s Westworld.  And an impressive debut it is.

The film looks terrific, the action sequences are well staged and original and it’s heartening to see such a big budget movie in the hands of a first time woman director.

The story line however isn’t always clear – the memories, which are effectively flashbacks played out for Nick’s and our information in a sort of circus ring in his treatment room, are sometimes confusing rather than clarifying the story.   Also having created such an original and interesting world for her gumshoe hero to inhabit, it would have been good to have learned more about the back story of that world and its everyday workings, detail of which gets a bit lost in the all action story line.